Sikhs Excel at the Parliament of World’s Religions

USA: A press release by the American Sikh Council (ASC) says that the ASC led with other Sikh organizations the Council of Parliament of World;s Religions (CPWR) participation at Salt Lake City, Utah from October 15 -19, 2015. This event is held every four years and this year it was attended by over 9,500 people from over 50 different religious/peace organizations and more than 80 countries. 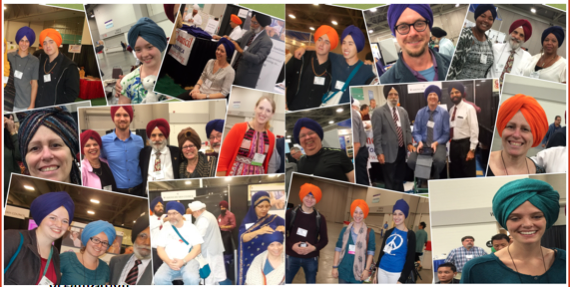 One of the Sikh presenters S. Sutinder Singh observed, “As I entered the building I found myself in a huge hall full of people having ‘Guru Ka Langar’. I was just awe-struck with the number of people being served (over 5000 every day) and the way they were being served – in a very organized and respectful manner by about 60 Sikhs. I had been travelling all day and now at 2 pm I decided it was time for me to have the ‘Guru Ka Langar’. So I joined the line and the first thing we did was remove our shoes, and the Sikhs helped others cover their heads with a white cloth. As we moved along the line, another group of Sikhs handed us damp tissues to clean our hands with. Moving along the line we were guided to one of several rows where people were sitting on the floor and already having the ‘Guru Ka Langar’. As soon as I sat down one of the Sikhs handed me a plate, and in no time at all, it was filled with naan, daal, chick peas, salad, raita and fruit. I could not believe the efficiency with which it was done. Soon I was enjoying a delicious meal. As I looked around, I saw about a hundred Sikhs serving the food, in a very respectful and dignified manner. For those who were infirm or had difficulty sitting down on the floor, a special area was provided with tables and chairs – how considerate!”

Sikhs held several seminars, panel discussions and presentations. The Sikh speakers spoke about their religion, their history and their traditions. There was also a lot of focus on the issues and problems Sikhs have had in the past, especially since 9/11/2001. Other speakers focused on the current issues such as discrimination, hate crimes, bullying and harassment, in the US and in Panjab. The speakers emphasized the teachings of love, humility, universality of all and the oneness of the Almighty. Some of the key presenters were Lord Indarjit Singh of UK, and S. Gurtej Singh of Chandigarh, Punjab. The presentations were very well received.

Other programs included kirtan by the Nishkam Sevak Jatha and by Raagi Kultar Singh and his Jatha. Sikh youth organizations had a good display and presentations in the ‘Sacred Space’ room. The visiting guests were treated with detail information on the Sikh Faith.

The American Sikh Council (ASC) had an exhibit where they handed out educational materials on the Sikh Faith while tying turbans on anyone who wanted one. Over the next few days ASC volunteers tied over 500 turbans. While tying turbans ASC members had one on one contact with guests and the undivided attention for five or so minutes to explain and discuss their heritage. The turban tying became so popular that when ASC ran out of turban material. The guests brought their own scarfs and had ASC members tied them like dastaars/turbans. Thanks to local and the Los Angeles sangat who contributed additional turbans ASC members ended up tying over 850 turbans. One out of every ten guests had a dastaar/turban on their head. And some of the attendees even reported that they slept with their turbans in case they may be unable to put it back on next day. Some actually went to the airport on their way back with the turban on their heads as they wanted experience the treatment that each Sikh gets when they travel by air.

As ASC Chair S. Gulbarg Singh witnessed, “Many of the people we tied turbans on would either have tears in their eyes or they would openly start crying. When asked why, they would typically say, “I never knew you were such generous people, you have had so many bad experiences, from discrimination to killings and yet you are here giving us free food, and tying turbans and being so kind to everyone!” Another teary eyed woman said that her son is homeless in Los Angeles and the only people who care to feed him are the Sikhs. Many of the attendees knew about the Sikhs already and would pass by wishing us well.”

On the final day during the closing ceremonies in a hall with over 5000 attendees, the organizers singled out the Sikhs for praise. Although there were only about a hundred Sikhs in total, there were another 400 people walking around with turbans! The chairman of CPWR said that it was “the first time I have seen so many Sikhs – brown Sikhs, white Sikhs, black Sikhs, yellow Sikhs – and why not?” A thunderous applause followed. In addition he asked all the Sikhs to stand up and thanked all of them for the ‘Guru Ka Langar’ and once again the attendees responded with thunderous applause. This was the moment that the Sikhs finally put themselves on the map. This was a truly inspirational meeting.

The Sikh participation in this year’s Parliament of World’s Religions was a monumental success, all due to the collective effort of Sikhs across our nation and beyond.

ASC member S.Iqbal Singh stated the most common comment by the attendees on the final day was, “The Sikhs have stolen the show!”

Imam Abdul Malik Mujahid the Chair of the Parliament of the World’s Religions stated, “And who says there is no free lunch in America, Sikhs came with kirpan and conquered the Parliament by sharing their langar tradition all five days.”

The next Parliament of World Religions has been scheduled in two years (not four) with the country to be announced.