New York, USA: US based human rights group “Sikhs For Justice” (SFJ) whose Facebook page has been blocked by the Indian government has given a call to the Sikh diaspora in North America to boycott Air India. The national airline of the India operates several flights every day to various destinations in North America.

SFJ claims that it called for boycott of Air India to highlight the dictatorial action of Modi Government to block the democratic campaign of SFJ to hold referendum in the state of Punjab. 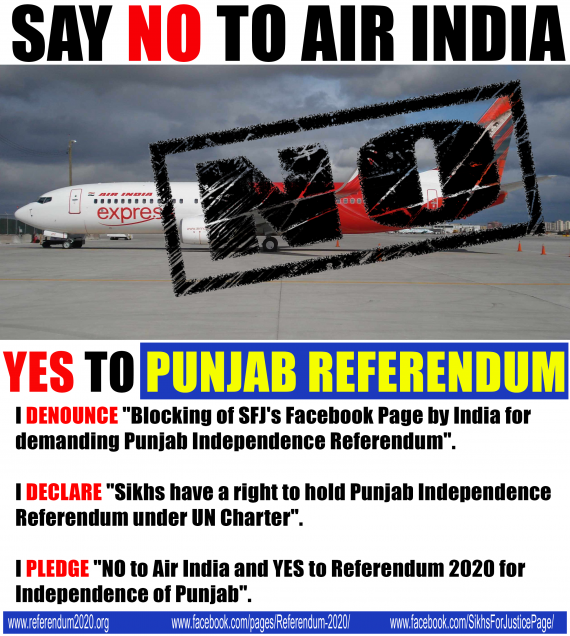 Say No to Air India: A poster released by Sikhs For Justice

The Sikh rights group plans to reach out to every Sikh household in North America through social media and local Gurdwaras. SFJ volunteers will be setting up “No To Air India” camps at Gurdwaras urging the community to sign the pledge boycotting India’s national airline during the upcoming busy travel season.

Advocating to banish Air India, attorney Gurpatwant Singh Pannun, legal advisor to SFJ stated that “every dictatorial action of Modi Government will be challenged through equally strong but legal, peaceful and democratic action”. “Our campaign is aimed at mounting pressure on India into holding Punjab Independence Referendum under UN Charter”, added attorney Pannun.

SFJ has given a call to hold a referendum in the year 2020 on the question of Sikh sovereignty. Referendum 2020 will be held in the state of Punjab and among Sikh diaspora living in America, Canada, United Kingdom, European Union, Australia, New Zealand, Singapore, Thailand, Indonesia, Malaysia and Middle Eastern Countries.