The event was also addressed by Lord Nazir Ahmed who extended his support to the cause fo Khalistan.

Addressing the gathering Richard J Rogers, an expert in international human rights and international criminal law, said that Sikhs qualify as “peoples” as they have distinct, language, religion, culture and Sikhs had their own state that was concurred by the British in 1849. 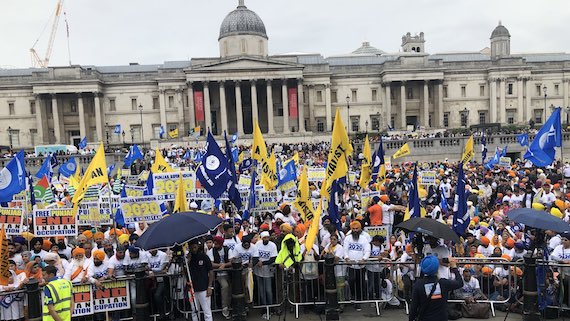 He said that in international law there are three exceptional circumstances where peoples can claim succession from the parent state and Sikhs, he added, are eligible to claim succession under two of these exceptions. He said that the Government of India should get to table to negotiated the terms of establishment of Sikh state.

Gurpatwant Singh Pannu, legal advisor of the Sikhs for Justice, announced the adoption to three resolutions.

In first resolution it is said that a non-governmental referendum will be held in November 2020 in all countries of the world, in Punjab and in all cities of India where Sikhs were subjected to genocide in 1984.

In second resolution it is said that the United Nations and the International Law recognises that if peoples have district identity, territory and religion – then these elements help peoples to claim their separate state, therefore after non-government referendum in November 2020 the claim of independent Khalsa raj (Sikh state) will be presented to the United Nations.

In third resolution it is said that after presenting the claim of Sikh state to the United Nations the movement of separate Sikh state a mass movement for establishment of such state will be initiated. In this resolution, the organisers called upon the gathering to show their commitment to the cause of Khalistan and then they themselves vowed to carry on their move for Khalistan.

The ‘London Declaration’ event was largely attended by Sikhs.

A few Indians also held a pro-India rally in London to show their support for the Indian government.

** The event was continued at the time to writing this news.