Washington D.C, USA: On September 30, while US President Obama will be laying red carpet for Indian Prime Minister Narendra Modi at the White House, a Citizens’ Court convened by human rights group “Sikhs For Justice” (SFJ) will hold indictment proceedings against the Indian Prime Minister. The proceedings before Citizens Court will be telecast live throughout the United States by the Sikh rights group.

A release by Sikhs for Justice (SFJ)) says [t]he indictment proceedings will be conducted in a replica court room set up in the President’s Park right in the front of the White House. The charge sheet issued by SFJ lists actions of Modi during 2002 massacre of Muslims which constitute federal offenses under several provisions of the United States Code. 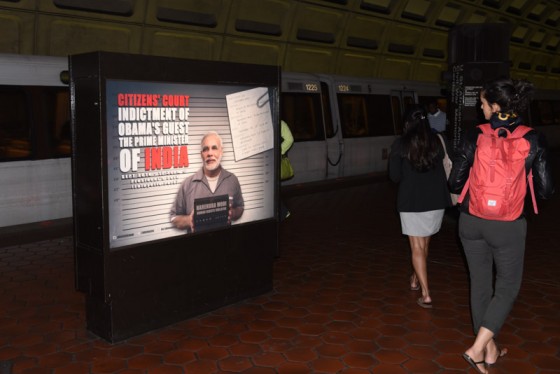 Photo by: Sikhs For Justice (SJF)

Charging Narendra Modi with the offense of “attacks on religious minorities in India”, the writing on the diorama states “Citizens’ Court – Indictment of Obama’s Guest, the Prime Minister of India – September 30th, 12:30 PM at President’s Park”.

The Citizens’ court will constitute of a presiding judge, a grand jury and a prosecutor while Modi’s handcuffed and prison dressed effigy will be placed in the defendant’s box.

Laying the factual details of Narendra Modi’s crimes and culpability, the charge sheet filed in the Citizens’ court lists crimes of genocide; murders in the first degree; rapes and sexual assaults; torture; tempering with the witnesses, victims and informants; and obstruction of criminal investigations.

Explaining the reasons for the convening Citizens’ Court, attorney Gurpatwant Singh Pannun, legal advisor to SFJ stated that starting from 1984 political leaders in India have a long history of organizing massacres of religious minorities with impunity. At one hand, Citizens’ Court mocks the judicial system of India for its failure to convict a known human rights violator and on the other hand, it depicts the plight and represents the sentiments of religious minorities of India, particularly victims of 2002 Muslims massacre, added attorney Pannun.

The charge sheet will be served on Indian PM Narendra Modi through Ambassador of India to the United States Dr. S. Jaishankar in Washington DC.

SFJ has collaborated with American Gurudwara Parbandhak Committee (AGPC) an umbrella organization of more than 70 Gurudwaras across the country, to mobilize the Sikh community to attend the indictment proceedings against the Indian Prime Minister Narendra Modi before the Citizens’ Court.