Sikhs for Justice sues Facebook for Page block in India

New York, USA: A U.S.-based Sikh advocacy group has filed suit against Facebook, accusing the social media giant of blocking access to its Facebook page in India and raising concerns over the company’s censorship policies.

Sikhs for Justice (SFJ) has reportedly moved in a California federal court this week requesting that a judge force Facebook to stop blocking its Facebook page in India and release all its communications with Indian officials. 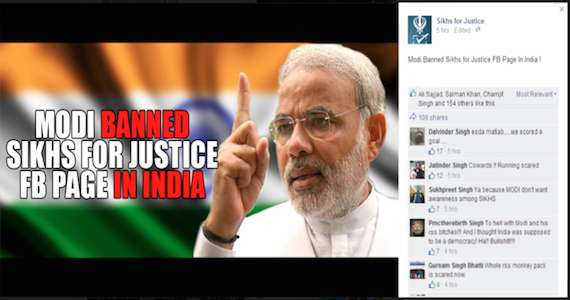 The complaint alleges that the company illegally restricted access to SFJ’s page, presumably at the request of the Indian government, who disagrees with the group’s activism. Among other things, the SFJ has been criticising Indian Prime Minister Narendra Modi and campaigned against “forced conversions of Christians and Muslims to Hinduism,” an unsettling practice that has been reported to occur throughout India at the hands of Hindu nationalists.

“In or around the first week of May 2015, the plaintiff learnt the contents of the Plaintiff’s Facebook Page … were blocked completely in India without notice, reason, explanation, or proper and lawful cause,” the complaint, which was provided to Think Progress, read. The group’s lawyer reportedly sent Facebook a cease and desist letter asking for access to the be restored, but only received an automated response.

“Blocking of SFJ’s page for exposing India with regard to the plight of religious minorities and advocating Sikh referendum in Punjab, Facebook Inc. violates section 2000a of 42 U.S. Code which prohibits discrimination on the grounds of religion, race or national origin,” the complaint argued.

The lawsuit, which also sought compensatory and punitive damages, is unusual in that it challenges Facebook here in the United States, where free speech laws are well protected. But the digital juggernaut has long endured harsh criticism for helping foreign governments silence free expression. Free speech advocates have blasted Facebook for banning the pages of political rock bands in Pakistan at the urging of government censors, and opposition leaders in Russia lashed out at the company after it removed a website dedicated to organizing a protest against President Vladimir V. Putin in December of last year.

Facebook has seen a rapid increase in requests to limit content all over the world, but India appears to be the worst offender: the company’s own Global Government Requests Report listed it as the top country asking for webpage takedowns from July to December 2014, with Facebook ultimately restricting 5,832 “pieces of content” on behalf of the Indian government. Although the report did not detail the reasoning for each request, Facebook hinted that many of the inquiries were related to religious issues.

“We restricted access in India to content reported primarily by law enforcement agencies and the India Computer Emergency Response Team within the Ministry of Communications and Information Technology including anti-religious content and hate speech that could cause unrest and disharmony,” Facebook’s report reads.

Indeed, while India’s Supreme Court recently struck down a law that allowed the government to jail citizens for posting “controversial” comments on social media, faith remains an especially inflammatory subject in the subcontinent. Hindu, Muslim, Sikh, and Christian groups have long clashed with each other and local authorities in various parts of the country, but the arrival of new political leadership may be escalating tensions: Prime Minister Modi, a hardline Hindu nationalist elected last year, has been accused by various groups — including SFJ — of doing little to stop sectarian riots that led to the deaths of more than a thousand Muslims in 2002.

“Since the election of Narendra Modi as Prime Minister of India in May 2014, religious minorities especially Christians, Muslims and Sikhs are under increased attacks from the Hindu supremacist groups closely aligned with the ruling party of India,” SFJ’s complaint read.