London/ England: Thousands of Sikhs protested outside the British parliament on Wednesday, calling for the release of what they said were Sikh political prisoners in India.

Demonstrators also raised the case of octogenarian Bapu Surat Singh Khalsa, who is on hunger strike in India to press the same cause. 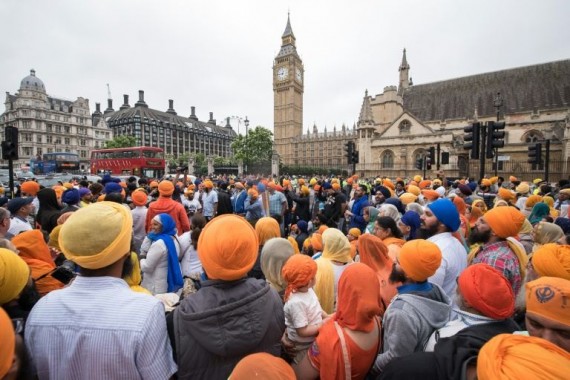 The demonstration, which blocked the roads outside the Houses of Parliament in London, was called by the Sikh Federation (UK), the largest Sikh organisation in Britain.

Its chair, Bhai Amrik Singh, said British Prime Minister David Cameron and Foreign Secretary Philip Hammond “were asked to urgently take up the issue of the release of Sikh political prisoners in Indian jails who have completed the terms of their sentence. But we have had no answers.

“It is a sad reflection that the present UK government is turning a blind eye to human rights violations of minorities in India fearing various trade deals could be jeopardised,” he said.

“We have been forced to peacefully demonstrate at the lack of courage and action by the UK government on behalf of British Sikhs.”