Birmingham, England: Hundreds of Sikhs today held a protest outside the Conservative Party Conference in the International Convention Centre (ICC) in Birmingham on the first day of the conference.

The protest organised by the Federation of Sikh Organisations (FSO) started at 1 pm and is expected to last till 3 pm. The timings of the protest fall just before Jeremy Hunt, the Foreign Secretary was expected to address the conference.

A press release by Sikh Federation UK states that the protest was against the continued detention of Jagtar Singh Johal from Dumbarton and the refusal of Jeremy Hunt, the Foreign Secretary to meet with the family and their MP Martin Docherty-Hughes of the SNP despite promises made by the previous Foreign Secretary in Parliament. 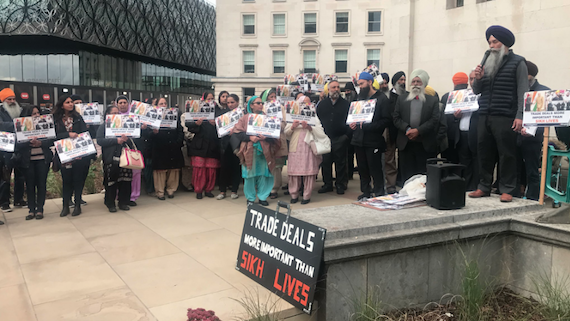 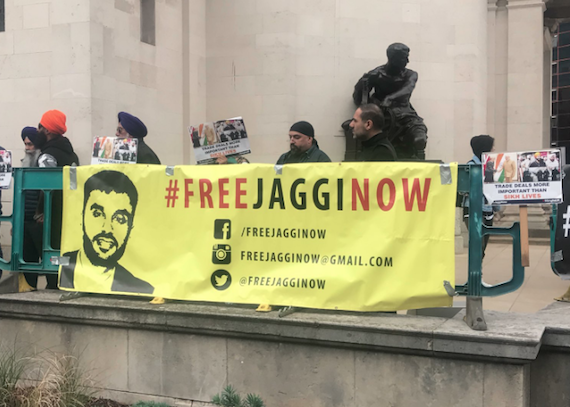 The Sikh body said that ‘[l]ast weeks police raids have bought bitter memories of the past actions of the Conservative government under Margaret Thatcher assisting the Indian authorities in the 1984 Sikh Genocide and taking anti-Sikh measures against British Sikhs in the 1980s’. 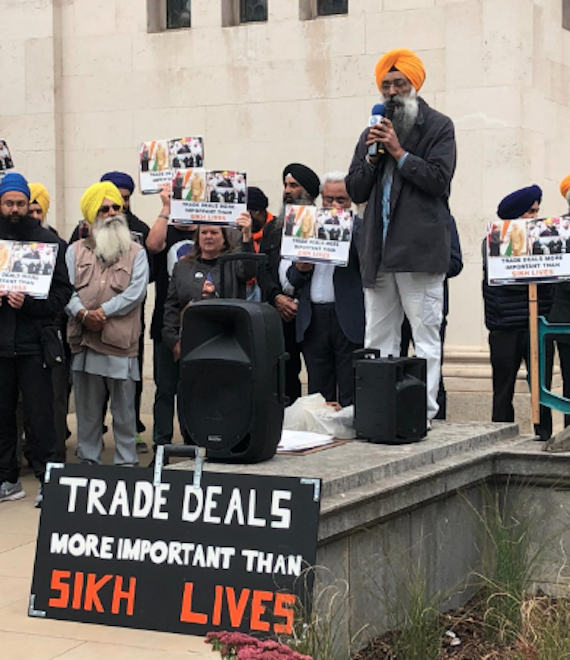 Some of these anti-Sikh measures were revealed in the Sacrificing Sikhs report based on around half of the UK government’s own papers that have been made available from the mid-1980s, said Gurjeet Singh, National Press Secretary of the Sikh Federation UK.

It is notably that 31-year old Jagtar Singh Johal alias Jaggi travelled to Indian subcontinent to get married having been engaged six months earlier in his first visit to Punjab. Last November and a couple of weeks after his wedding he was picked-up, hooded and thrown into a van whilst out shopping with his wife and cousin sister and has now been in an Indian jail for 330 days. 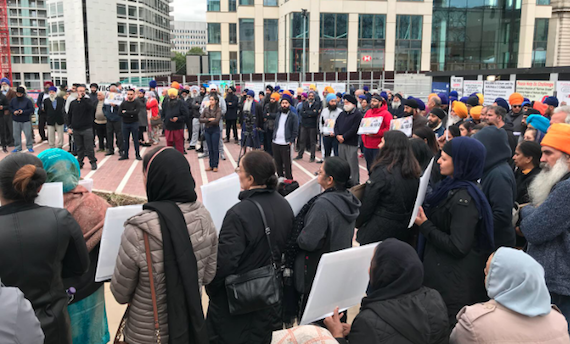 Gurjeet Singh said: “Within days of his abduction and torture by Indian police and denial of proper access to British consular staff there was a huge outcry by the British Sikh community and around 250 MPs that had letters from constituents.
Theresa May was therefore compelled to speak to the media specifically about Jagtar’s case. The next day in Parliament Rory Stewart, the Foreign Minister stood up and in response to a question from Jagtar’s MP about his torture threatened the Indian authorities with ‘extreme action’.
In April this year in an unprecedented move Theresa May raised Jagtar’s case with Narendra Modi when he came to 10 Downing Street for a meeting before the Commonwealth Heads of Government Meeting (CHOGM).
However, last week’s police raids on the homes of five Sikh activists linked to the campaign to bring Jagtar Singh Johal back home has created huge tensions between the Sikh community, police and Home Office as further details emerge.
Theresa May has to date held a robust line with the Indian authorities on several issues despite pressure of the need for a beneficial post-Brexit trade deal with India. However Sajid Javid with leadership ambitions of his own appears not to see eye to eye with the PM when it comes to India”.

Campaigners of the FreeJaggiNow campaign said: Jagtar Singh Johal has already made 55 court appearances, but no witnesses or evidence has yet been presented in court to substantiate any charge exposing the mockery of the Indian legal system.

“The raids last week appear to strongly suggest the Indian authorities have turned to the Home Secretary and British police to find any evidence that may help against Jagtar Singh Johal”, they added.

“We can reveal although the raids were co-ordinated by West Midlands police they were almost certainly sanctioned by Sajid Javid, the Home Secretary to appease the Indian authorities. Preet Kaur Gill MP, the Chair of the All Party Parliamentary Group for British Sikhs is set to meet Sajid Javid in two weeks time”, said Gurjeet Singh of Sikh Federation UK.

West Midlands police have officially refused to comment on the identity of those that have had their homes raided other than the investigation relates to extremism in India. However, senior Indian police officers have provided names, addresses and photographs to Indian journalists of the five British Sikh activists that have had their homes raided in Britain and told them this information has come directly from the West Midlands Counter Terror Unit (WMCTU).

This has confirmed fears of collusion and opened up the West Midlands police to legal action being led by Gareth Peirce, Gurjeet Singh added.

The West Midlands police, including Matt Ward the head of the WMCTU is so worried by the revelations and the threat of legal action as to the validity and justification of the raids that the WMCTU has tried to manipulate the Sikh community, he maintained.

The WMCTU somehow got the Sikh Council UK to put out the police defences and an updated press release three days after the raids. However, nine days later West Midlands police itself has puzzlingly refused to issue its own updated press release as they fear being challenged by the Sikh Federation (UK) and lawyers acting for the five Sikh activists.

However, the Sikh Federation (UK) has asked why this was not in their initial press release on 18 September.

This is stating the obvious suggesting the amended press release never issued was meant only for a Sikh audience.

The Sikh Federation (UK) has asked who has made the allegations if it is not the Indian authorities and if there have been terrorist offences in the UK and intelligence gathered why have there been no arrests.

How do the West Midlands police explain the specific quotes by senior Punjab police officers about information supplied by the WMCTU and the raids being the result of diplomatic pressure by India on the UK.

Bhai Amrik Singh, the Chair of the Sikh Federation (UK) said: “We are deeply distressed the West Midlands police has tried to manipulate the Sikh community and is supplying information to the Indian police.”
“We strongly condemn these actions of the West Midlands police and Sajid Javid for sanctioning a fishing exercise to gather information that may prolong the detention of a 31 year old Scot who has already been tortured and held in an Indian jail with no chance of a fair and speedy trial.”