Washington, USA: “You can have growth with less.” So begins Dr. Mohanbir Sawhney’s thoughts on environmental preservation in a constantly spending and extracting world economy at the annual EcoSikh Benefit Dinner in Washington, DC.

Dr. Sawhney, who is a world-renowned business consultant and acclaimed professor at the prestigious Kellogg School of Management at Northwestern University, is no stranger to the ins and outs of economic growth, which often has disastrous affects on the environment. In his keynote speech, Sawhney challenged the audience to reduce the excess in their lives by outlining ways to live with less: reducing the number of cars they own, trimming their energy usage, and using economic growth to invest in environmental conservation. Sawhney said, “In a moment of crisis, we always turn to faith. The environmental crisis facing the earth also calls upon all of us to turn to faith for answer and guidance. EcoSikh is a great initiative in this direction. Guru Nanak has shown that Air is to be respected as teacher, Water as father and earth as Mother. This crisis can only be solved with a sense of humility and reverence towards nature.” 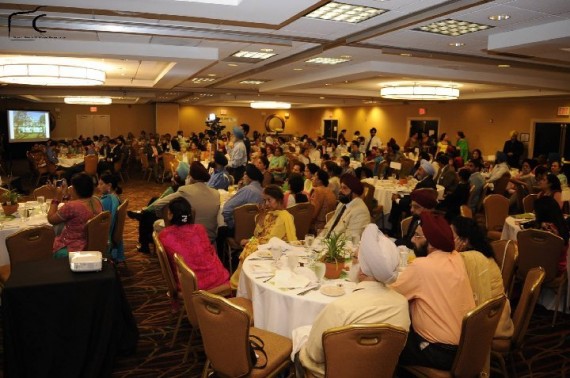 He also emphasized that “If all Indians and Chinese were to live by the Western lifestyle, this world would no longer be sustainable. The only way out is to for all of us to practice ‘voluntary simplicity’. He cited Pope Francis’s recent encyclical on climate change and appealed to audience to support efforts by EcoSikh on behalf of the Sikhs.

Over 250 guests joined Dr. Sawhney and EcoSikh at EcoSikh’s benefit dinner, an annual fundraiser to support the environmental organization’s international programs. Consistently, EcoSikh’s fundraiser is the “largest gathering of Sikhs for environmental action in the United States,” according to event organizers.

The event featured musical entertainment from Devender Pal Singh, an international Punjabi pop star and former contestant on Indian Idol. Twenty-one-year-old Devender Pal charmed the audience with his humor and encouraged event-goers to sing along to his covers of popular songs.

Special celebrity guest and NBA athlete Gursimran “Sim” Bhullar also gave a speech at the event. Bhullar is the NBA’s first player of Indian descent and recently played for the Sacramento Kings. Standing at 7 feet 5 inches, Bhullar drew the attention of the crowd as he spoke about his recent visit to Punjab. Bhullar recalled the excitement of children he met on his trip, but was saddened by the state of the environment in which they lived. While endorsing the environmental campaign of EcoSikh, Bhullar said, “We all have the responsibility to make sure that we leave this earth for future generations. We all must pitch in and save it. It the younger people and children who are going to suffer with the worsening weather and its effect worldwide.”

Dr. Rajwant Singh, President of EcoSikh, presented the water issues in India, such as groundwater depletion and pollution. He said, “The environmental crisis facing Punjab is a survival issue and it is a Panthic issue.” He also made the audience aware of pollution traversing Punjab and entering New Delhi’s atmosphere due to farmland scorching and coal burning.

Dr. Singh said, “It is our desire to make sure that Sikhs are present in every conversation and dialogue on environment and climate change at all levels internationally. The Sikh perspective pertaining to environment given by the Gurus needs to be propagated.” He added, “EcoSikh is grateful for the support from all over the world and especially the Washington community. If there was no EcoSikh, there would be no Sikh Environment Day or other Sikh green actions. EcoSikh would not be able to survive without all of your support.”

Gavinder Billing, a volunteer for EcoSikh, recited a poem for the environment, and was followed by an outpour of support and donations from the audience. The EcoSikh team appealed for support of three major projects: creating an environmental plan at Sikh sites in Pakistan for Guru Nanak’s 550th birth anniversary, rolling out a Green Gurdwara Initiative, and beginning a water campaign in Punjab and in India.

“EcoSikh plans on working with Pakistani officials to bring environmental projects to the locations around Nankana Sahib and Kartarpur Sahib, both sacred locations for Sikhs,” said program manager Sumeet Kaur. Plans include installing solar panels, creating organic farmland for langar, creating land reservations for forest areas, and generating an ethos of care for the environment among local stakeholders.

The evening also highlighted EcoSikh’s efforts to greenify gurdwaras and start water dialogues in Punjab, where groundwater is rapidly depleting. Through a powerful video showcasing their projects in the last year, EcoSikh displayed the environmental problems the Sikh community and India is facing, and the organization’s efforts to fix those problems.

The night came to an end with a performance by Devender Pal Singh, who engaged the crowd directly by dancing with guests on the dance floor and photo opportunities with Sim Bhullar.