Ontario: A Canada based Sikh activist name Gurpreet Singh supported by more than 2200 users on change.org- a petitioning portal launched an online petition urging Canada to investigate the activities of ‘Indian Agents’ on its soil. 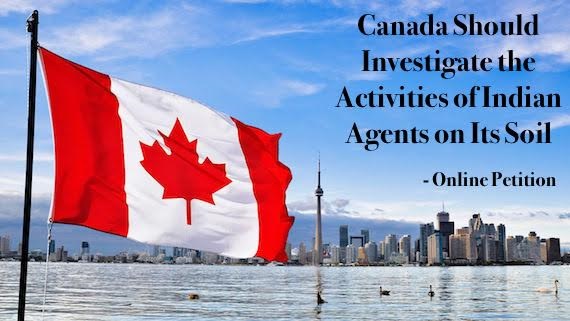 Not only Trudeau was given a cold treatment by the host country, he also received a bad press under the influence of a right wing government in India.

The petition reportedly reads as “In the light of recent controversies that eclipsed the Canadian Prime Minister Justin Trudeau’s visit to India, the government of Canada must investigate the activities of the Indian agents on its soil. These controversies were mainly started by the Indian leadership that has been accusing Canada of patronizing Sikh separatists. Despite the fact that Sikh militancy has ended long time back, the Indian politicians want to keep the issue alive and create false fear about it to polarize Hindu majority against the Sikhs.”

“Not only Trudeau was given a cold treatment by the host country, he also received a bad press under the influence of a right wing government in India. Even as India kept blaming Trudeau for pandering Sikh separatists, the Indian government gave visa to a former Sikh separatist Jaspal Singh Atwal and removed many other names from its blacklist of Sikh activists living overseas. All this demands an explanation from India and to unfold the truth behind this entire episode, Canada needs to act fast and expose the Indian officials responsible for the mess and expel them immediately.”

The petition addressed to the Canadian Prime Minister Justin Trudeau.

To View The Petition Click on The Link https://www.change.org/p/justin-trudeau-canada-should-investigate-the-activities-of-indian-agents-on-its-soil