New York: At a colorful multifaith ceremony with Buddhist chants, Zoroastrian prayers and Sikh singing at the Church Center for the UN, Ambassador Mogens Lykketoft, President of the UN General Assembly took delivery of the Interfaith Climate Change Statement to World Leaders signed by 270 high-level religious leaders, 4970 individuals and 176 religious groups from around the world.

The Statement was handed to Mr. Lykketoft by ´millenial generation´ 23-year old Stephen Chiu, Outreach Specialist of the international Buddhist Tzu-Chi Foundation. The event ended with a singing from the Sikh tradition by the EcoSikh delegation. Dr. Rajwant Singh, President of EcoSikh, along with Bhai Gurdarshan Singh and Sucha Singh of the Guru Gobind Singh Foundation of Washington sang the words of Guru Nanak –‘Pavan Guru, Pani Pita, Mata Dharth – Air is the teacher, water, the father and earth is the Mother of all’ 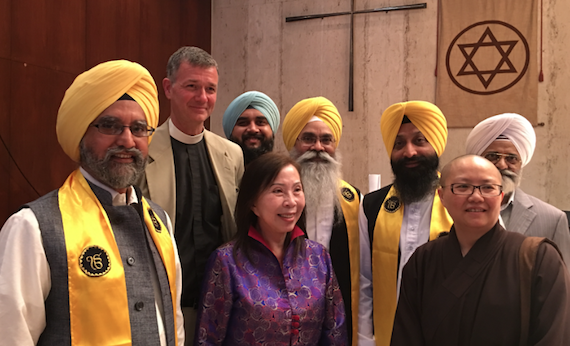 “This and other religious initiatives demonstrate that climate change is now firmly accepted as a moral issue”, Mr. Lykketoft said. “The Statement shows how religions can be a catalyst for common action. You are telling your followers that you recognize the seriousness of climate change, its impacts on the vitality of the planet and the wellbeing of humanity. You are demanding action to be taken now. “
“Most of the action will have to come from individuals. The faith community is part of the broader Civil Society movement and plays an absolutely critical role in reaching out to followers to change their behavior and demand smart policies. An initiative like this makes me confident that we can and will succeed.“
Ambassador François Delattre, Permanent Representative of France to the United Nations in New York stated that “the convergence of so many faith communities is heartening and encouraging. The level of commitment of faith leaders in combatting climate change and supporting the Paris Agreement is unprecedented. We are the last generation with the ability to prevent climate change getting out of control with disastrous consequences. There is no Plan B, no Planet B.”

“Paris was just the beginning of a long, hard journey to a carbon-free world”, Mr. Delattre continued, “but a turning point. COP 21 was a collective not a French success, demonstrating the vitality of the UN system and of multilateralism. Hard choices are ahead, and skepticism and cynicism are still rampant. We need to continue listening to our conscience, which is why the faith community is so important and so inspiring.”

Dr. Rajwant Singh said, “Sikhs are committed to play their part in combatting climate change. Our gurdwaras (Sikh place of worship) ought to become eco-friendly and that is going to the focus of EcoSikh in coming years. It is our moral duty to save mother earth for future generations.” Dhamanjit Singh Sehdev coordinated the EcoSikh participation along with Loveleen Kaur, EcoSikh North American Program Manager in Washington. EcoSikh based in Washington engages global Sikh community on climate change and environmental issues. It also works with the White House, United Nations and the World Bank on these issues.
Halldor Thorgeirsson, Director of Strategy at the secretariat of the UN Framework Convention on Climate Change said, “I am very encouraged at the strong expression of support. Your Statement shows that you understand that avoiding dangerous climate change requires fundamental economic transformation, not fine tuning of existing systems, leading to deep and later full decarbonisation of the energy supply. This transition will bring multiple other benefits and open huge opportunities. So the moral and economic imperatives are fully aligned in this case.”

“150 nations will sign the Paris Agreement on Friday and entry into force is likely next year. We won´t achieve its goals without the massive mobilization of all actors of society. There is need for a deep moral motivation for change – religion can continue to be a powerful part of the solution. This challenge has injected a new urgency into the dialogue between religions.”

According to Selwin Hart, Leader of the UN Secretary-General´s Climate Change Team “faith communities are vital for promoting global efforts to address the climate change challenge. Sixty heads of state or government will be among the 150 nations represented at Friday´s signing of the Paris Agreement – a record. A number of small island developing states will deposit ratification instruments, on the same day.”

Additional statements were made by the Global Chairperson of the United Religions Initiative, Kiran Bali, Iman Al-Hajj Talib Abdur-Rashid, Vice President of the Muslim Alliance of North America, Radhanath Swami, Hindu, member of the Board of Governors of the International Society for Krishna Consciousness and Dr. Kenjuitsu Nakagaki, President of the Buddhist Council of New York.
The event was moderated by Rev. Fletcher Harper, Executive Director of GreenFaith, a New Jersey based center for advocacy and training of faith leaders in environmental issues.