Barcelona: While people of Catalonia were voting in Referendum on October 01, a delegation of “Sikhs For Justice” (SFJ) was in Barcelona to lobby for Punjab Independence Referendum 2020, the US based Sikh activists group said in a press release issued on October 6.

“SFJ’s delegation from America, Canada and Europe met with the officials of Catalonian government and appraised them about the Sikh situation in India and how linguistic, cultural and religious identity of the people of Punjab is being usurped, their natural resources are being driven out and their struggle for right to self determination”, reads the statement issued by SFJ.

SJF legal advisor Gurpatwant Singh Pannun said: “As a part of campaign to seek support of all the referendum seeking nations around the world for Punjab Independence Referendum, SFJ delegation met with Catalonia’s Minister for Immigration”. 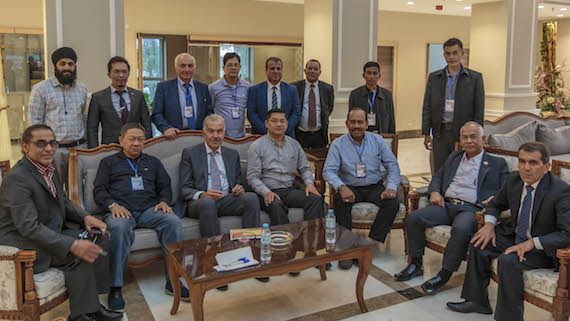 Catalonia region successfully held a non-binding independence referendum in the face of opposition from the Central government and in clear violation of the Constitution of Spain. Ninety percent Catalonians voted in support of secession of Catalonia from Spain and a formal declaration by Carles Puigdemont, the President Catalonia is expected in his address to the Parliament on Tuesday.

Catalonia is one of Spain’s wealthiest and most productive regions and has a distinct history dating back almost 1,000 years. Before the Spanish Civil War it enjoyed broad autonomy but that was suppressed under decades of Gen Francisco Franco’s dictatorship from 1939-75. When Franco died, Catalan nationalism was revived and eventually the north-eastern region was granted autonomy again, under the 1978 constitution.

“Just like Catalonians and Kurds whose culture and language is on the brink of extinction, separate religious, cultural and linguistic identity of Sikh people has also been usurped by India since 1947”, stated attorney Gurpatwant Singh Pannun, legal advisor to SFJ who is reportedly camping in Barcelona since September 27.

“Sikh people of Punjab who refused to assent the Indian Constitution have never been given a chance to express their opinion about whether they want to join the Indian Union or become an independent country”, added attorney Pannun.

Earlier SFJ delegation was in Kurdistan on the invitation of Kurdistan Electoral Commission as “International Observer” to observe the voting process for September 25 Independence Referendum.

SFJ is campaigning for a non-binding Referendum in the year 2020 in which people will be asked to vote on the question “I aspire for the formation of a sovereign and independent country in Indian occupied Punjab, on the basis that Sikhs are the indigenous people of Punjab, have a historical homeland, a separate religion and have the right to self-determination under Article 1 of Charter of The United Nations; International Covenant on Civil and Political Rights ; and International Covenant on Economic, Social and Cultural Rights”.

The non-binding Punjab Independence Referendum will be managed by independent reputable organizations and monitored by international NGOs and human rights activists. In year 2020, besides the State of Punjab, polling will be held in major cities of North America, Europe, Australia, New Zealand, Malaysia, Philippines, Singapore, Kenya and the Middle Eastern Countries.