Amritsar: Contesting and challenging the highly negative stance of the Indian state towards the right to self-determination, Dal Khalsa convention strongly reiterates its resolve to invoke the international community, the UN forums and other nationalities across the Indian subcontinent to seek and ensure enforceability of the UN recognised right which India steadfastly denies.

At a convention organized by Dal Khalsa, representatives of groups from Punjab and Kashmir participated in the deliberations on the subject right to Self-determination -UN recognises, India defeats. 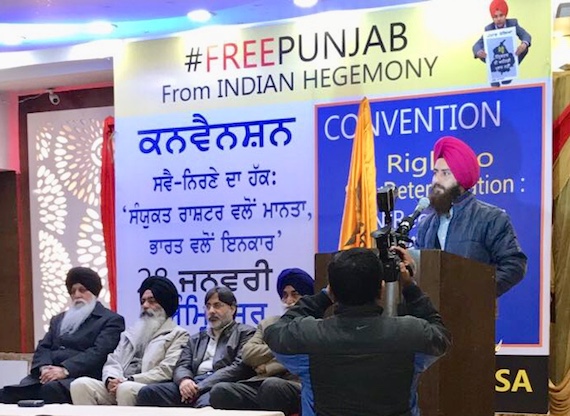 The gathering reiterated that there is no other peaceful route to resolve the existential crisis of Punjab and Kashmir that aspire to be sovereign and independent.

Hurriyat Conference chief Syed Ali shah Geelani addressed the gathering through video. He said India has gone back in honoring its commitment to the world community and people of Kashmir. He said we are facing worst kind of atrocities day in and day out. Nothing is secure and safe including our lives, our resources, our honour and dignity. We are deprived of all fundamental rights. The world is mute. He appealed to people of Punjab to help their neighbor who are being oppressed. He said all oppressed people should join hands against common oppressor. He said India is not only denying but crushing our rights and aspirations.

Self-determination is nothing but a simple expression by the peoples of a nation about their intent about non-acceptance of their allegiance to their present dispensation under which they are forced to live due to an undesirable twist in their history and a declaration to move towards self-rule, said Dal Khalsa president H S Cheema in his address. 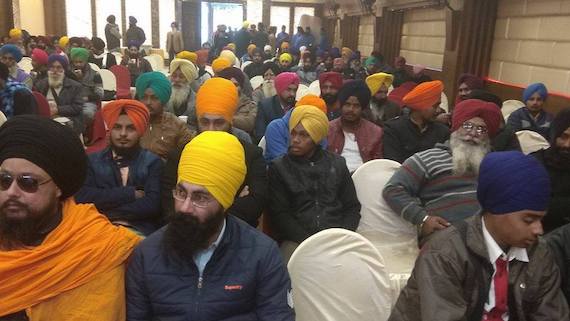 A view of Audience during the conference on Self Determination | Amritsar | January 18, 2018

Indian leadership, pseudo-intellectuals and media says the right self-determination is vague and restricted to colonizised states and some even question the Sikh claim to it. “We would like to clarify that the Sikh claim to statehood is deeply entrenched in their history and tradition”, he asserted.

Prof SAR Geelani from Delhi University while addressing the audience said the people of Kashmir have a UN resolution supporting their legitimate claim but it is the prevarication of the Indian state that publicly delegitimizes this right and continues to crush it through military occupation.

Presenting a key note of the convention, party spokesperson Kanwar Pal Singh said the people of Punjab have the full right to invoke the 14 December 1960 resolution of the UN General Assembly on “Declaration of the Granting of Independence to Colonial Countries and Peoples.” Punjab fully fits the bill. We were a country, which had diplomatic relations with China and Tibet. We were a country whose borders extended up to present day Afghanistan. We had treaty relations as a people with the British.

We seek the transfer of power back to the Sikhs through the exercise of this right to self-determination guaranteed under this UN resolution. As simply put by the UN, the goal of decolonisation cannot be achieved without the right to self-determination. Heretofore, Sikh organisations have petitioned the UN individually and collectively, though there has been no response so far.

Certainly the focus of the right in the declaration on granting of independence to colonial countries and peoples 1960 was on “the necessity of bringing to speedy and unconditional end colonialism in all its forms and manifestations.” This restrictive interpretation has however become rightly discredited both by subsequent international law and by state practice:

Since 1960 not one of the major international instruments which have dealt with the right of self-determination has limited the application of the right to the colonial situations. For example,

As we have already seen common Article 1 of the two International Human Rights Covenants of 1966 applies the right to “all Peoples” without any restriction as to their status and the obligation is on all states, “including those having responsibility for the administration of [colonial] Territories”

Article 20 (2) of the African Charter refers to both “colonised and oppressed people” as having the right.

In fact, the substantial increase in membership of the United Nations in the 1991-1992 period is a reflection of this broader application of the right of self-determination to non-colonial situations.

Former head of the Dal Khalsa H S Dhami said since the creation of a Commonwealth of the Khalsa, that Commonwealth which had the name of Sarkar-e-Khalsa in 1849 and was annexed by British India. Since then, through chicanery, deceit and plain political craftsmanship -first the British and then Indian imperialists have ensured that the Sikh nation is denied this fundamental right to them to determine their political freedom.

We stand colonised in all respects. What happened in 1947, was the colonisation of Punjab. As Sirdar Kapur Singh had put it, “Our potential to be masters of our own destiny was taken away. The sovereign character of the Sikh people cannot be compromised. It may have been held in abeyance still, but it is not the wont of Sikhs to continue to live like this.

Advocate Jaspal Singh Manjpur said the Sikhs irrespective of their affiliations understand this loud and clear. Notwithstanding whatever India says or its leaders have promised in the past, the notion of Sikh self-rule is rooted in the Sikh doctrine of owing allegiance to God and Guru and not any worldly authority.

The resolution adopted at a convention states that Self-determination is the inalienable right of all nationalities and peoples including people of Punjab and Kashmir. People of both the states are struggling to get the right and are facing hawkish Indian state, which has not only denied them their right but crushed and stifled their rightful aspirations to be free by portraying them separatist and classifying their demand as illegal and parochial.

Obviously, getting such a right from India is not easy. Countries like India which otherwise proclaim peaceful methods to solve problems, with full support and cohesion of the executive and the judiciary, use Draconian laws, brute police and military might to crush such aspirations. Nevertheless, beleaguered nations like the Sikhs and Kashmiris have no choice but to stand up and protect their future generations from being subsumed in the cauldron of Indian-ness.