Bathinda: It is learned that Sikh Sangat from all over Punjab and other nearby areas in its thousand are reaching Tawandi Sabo everyday for kar sewa (voluntary service) to clean Gurusar Sarovar at Damdama Sahib, one of the five Sikh Takhts. 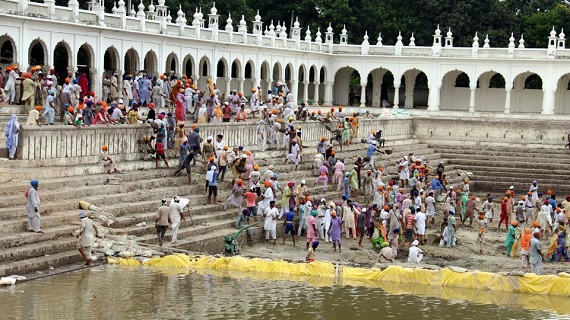 The 22 feet deep sarovar spread over five acres was last cleaned in 1958, so that task is massive. On the first day of the desilting and repair operation on Wednesday, nearly 50,000 people reportedly took part.

The sarovar was build by Guru Teg Bahadur Sahib and later developed by Guru Gobind Singh Ji in 1705. On its banks is where Guru Gobind Singh Ji, the tenth Sikh Guru, got the Saroop of Guru Granth Shaib ji written. Due to his literary activities, the place is also known as ‘Guru ki Kashi’.

Afterwards in 1913 on the directions of Maharaja Yadavindra Singh of Patiala the sarovar was attached with a canal for water supply. Media reports said that  Bunga Mastuna Committee, which maintains the pond, had called for the kar sewa now. Chhatar Singh, secretary, sevak jatha (volunteers’ group), Bunga Mastuana Committee, said more than 50,000 people reached for it sewa on Wednesday.

It is said that the committee has divided the sarovar into two parts, one of which has four feet of water so that the fish are safe.  “Half of the pond was cleaned in two days,”Chhatar Singh said while talking to the media here on Friday he further added that people reached as early as 4 am. “The operation will take a month as stairs of the sarovar and foundations of adjoining buildings will be repaired too.”

It was reported that at the site people from all walks of life and various section of the society were seen involved in the ongoing kar sewa. Teachers, policemen, farmers, masons, cobblers could be seen lending each other a hand. “Sikhism believes in equality, and kar sewa is a perfect example of it. No one asks about anyone’s caste or social status. Even very well-off people can be seen carrying the silt,”says Parkash Kaur one of the volunteer.