MPs and Sikh representatives earlier today met with the Home Office Minister, Victoria Atkins responsible for the Offensive Weapons Bill (OWB) to finalise an agreement to legally safeguard the sale, possession and use of large Kirpans.

The delegation was led by Preet Kaur Gill MP, the Chair of the All Party Parliamentary Group (APPG) for British Sikhs, and two Vice Chairs, Conservative MP Dominic Grieve and Labour MP Pat McFadden, both former Ministers that played a vital part in securing this victory. Dabinderjit Singh and Sukhvinder Singh two of the advisers to the Sikh Federation (UK) and prominent in the Sikh Council UK were also part of the delegation.

Following the successful meeting the government itself agreed to table an amendment to the Bill with an appropriate explanatory note specifically referring to the Kirpan. The Bill is currently going through Parliament with the third and final reading in the House of Commons expected to be on 27 November. 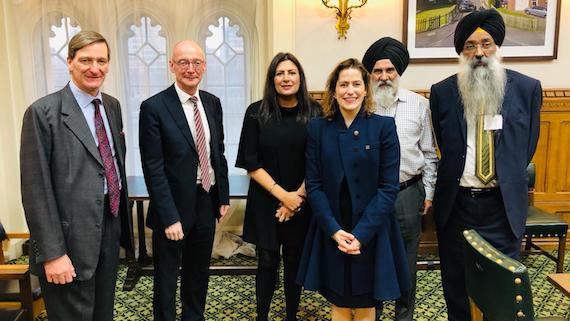 When the Sikh Federation (UK) and Sikh Network learnt that the OWB if passed would result in all large Kirpans (defined as those with curved blades over 50cm) being made illegal in terms of sale, possession and use they immediately contacted Preet Kaur Gill MP, the Chair of the APPG for British Sikhs.

Realising the significance of the problem the law change would create for virtually all Sikh families Preet quickly mobilised a cross party group of Conservative, Labour, Scottish National Party and Liberal Democrat MPs to put together an amendment to safeguard the larger Kirpan when the third and final reading was originally expected on 22 October. Preet and other MPs also met with the Home Office Minister, Victoria Atkins responsible for the Bill and Preet also had a one-to-one meeting with Sajid Javid, the Home Secretary.

Both Ministers were fully supportive of the need for Sikhs to have the large Kirpan and instructed officials to meet the APPG and make changes. Large Kirpans are used in Anand Karaj ceremonies, in Gatka training and demonstrations, in Nagar Kirtans and other processions, used in Amrit Sanchar ceremonies and displayed in front of Guru Granth Sahib Ji at Gurdwaras and in homes.

If the Offensive Weapons Bill had become law without change the possession of a large Kirpan even at home could have resulted in imprisonment of up to 1 year as well as a fine. It is estimated at least 100,000 Sikh households have one or more large Kirpans at home.

“We applaud Sajid Javid and Victoria Atkins for listening and acting so decisively to safeguard the rights of law abiding Sikhs and appreciating the significance of the large Kirpan to the Sikh way of life.”

“Preet Kaur Gill, Dominic Grieve and Pat McFadden have led the campaign expertly supported by the Sikh Federation (UK) advisers. The APPG has done a fantastic job in getting Home Office Ministers to clarify it was never their intention for the Offensive Weapons legislation to impact on large Kirpans.”

“Home Office officials have come up against the powerful Sikh lobby and will hopefully learn lessons that they must consult early with Sikh organisations. The officials now know large Kirpans are essential to Sikhs for reasons of religious observance and this will be reflected in the explanatory note to the new legislation”.