A press release by Parmeshar Dwar (PD) Network says: [i]n order to contribute in its own way to the global relief effort, The Parmeshar Dwar Trust, with the backing of the Sikh Sangat, arranged teams to be sent in aid to the affected region. Initially ten trucks were dispatched from Gurdwara Parmeshar Dwar Sahib with thousands of blankets, bedding, clothes, medicines, water and food packages for the affected victims. 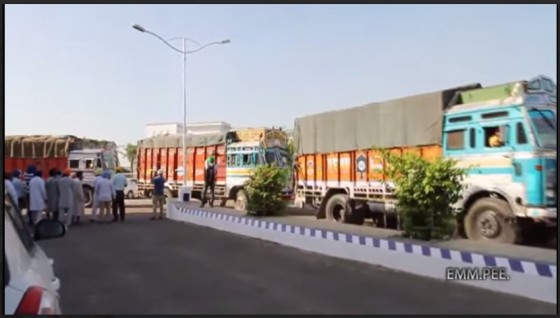 As an arm emerged from the humanitarian and selfless-service Sikh beliefs propagated by The Parmeshar Dwar Gurmat Parchar Mission, involved in charitable activities The Parmeshar Dwar Trust is a not-for-profit organisation based in Patiala and founded in 2009 by Sikh Parcharak Baba Ranjit Singh Khalsa Dhadrianwale.

The regions of Jammu and Kashmir in India, as well as Azad Kashmir, Gilgit-Baltistan and Punjab in Pakistan, have been affected by the floods. Caused by torrential rainfall, villages upon villages have been inundated in the natural disaster. Many charitable organisations from across the world are involved in the relief effort, including those established on Sikh philosophy.

Baba Ranjit Singh Khalsa said, “Where Gurmat Parchar is done, at the same time we must make efforts in our own small ways to live practically by what we preach.”

“When such natural calamities arise, we must not differentiate any human life with race, colour, creed or religion.”

“This is not a solitary endeavour by The Parmeshar Dwar Trust, as without the support of the hard-working and generous Sikh community, nothing is possible.”

Baba Ranjit Singh Khalsa also stressed working together in unity for any such humanitarian causes and supporting other Sikh charitable organisations across the world that immediately went in aid to the affected regions upon hearing the news on the very first day.