Geneva: In a written press release, sent to the Sikh Siyasat News (SSN), the Movement Against Atrocities & Repression, says: [o]ver three thousand Sikhs, Muslims, Christians, Dalits and “Stateless people” from across Europe, Switzerland, Germany, France, Italy, England, Belgium, Holland, Greece, Portugal, Spain and from Canada, America, Australia, Kashmir, Pakistan and India gathered peacefully on October 30th 2015, in front of the United Nations, Geneva, Switzerland, a symbolic space for civil and human rights, to stand in solidarity with Sikhs in Punjab. Harminder Singh Khalsa, Director and Spokesperson with Movement Against Atrocities and Repression (MAR) and one of the organizers of the rally said: “The purpose of the event was to commemorate 1984 and to bring awareness about the current situation in Punjab involving the desecration of the Guru Granth Sahib ji, the harassment of Sikhs and the conditions of the political prisoners languishing in jails despite serving their times and to get United Nations intervention.” 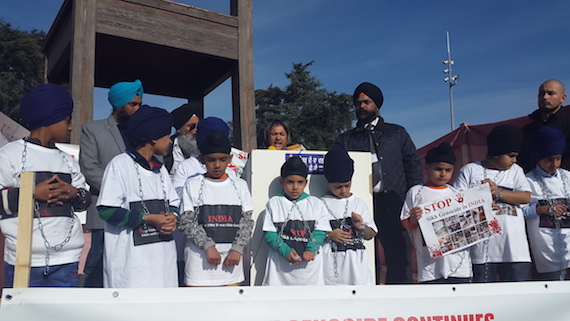 The spirit was more serious but hopeful especially, since transmitting these messages through social media has been easier than in the past. There were a raft of speakers who spoke about the human rights violations against religious minorities. Speakers included: Charles Graves, International Chairman of human rights of interfaith, who expressed concern for the treatment of Sikhs in Punjab and their right to express their faith, Dr. Soloman, with the World Council of Churches, echoed Graves sentiments adding that Sikhs and other religious minorities should lobby for spaces where they can express their faiths peacefully and without fear. Professor of Sociology and Anthropology, Indira Prahst, from Vancouver, Canada spoke about the continued violence with impunity by the Indian state towards Sikhs and other minorities as a means to achieve the Indian Nation building project of a Hindu centric nation. Prahst also drew attention to the abuse of the Anti-terror-laws such as the unlawful Activities (prevention) Act which Human rights groups assert, does not meet international human rights standards. Dr Jaan Khan, leader of the Tehreek-i- Insaaf group, addressed atrocities against minorities in India, how the violence Sikhs are confronted with is not new, and that Sikhs are not terrorists. Master Karan Singh, President of Gurdwara Langenthal, and moderator of the event, said that the current provocations against Sikhs and the anti-Sikh policies are becoming more visible for the world to see. He added that Sikhs will not allow the Indian State to plot against the Sikh Nation.” Dabinderjit Singh with Sikh Federation United Kingdom, gave a speech in which he noted that the conditions of Sikhs in India have not changed and that human rights violations continue in humiliating ways to present day. Representatives of Gurdwara’s across Europe, Sikh Organizations and Human rights groups also spoke on present issues involving Sikhs. Second generation Children participated and educated the world about how Sikhs are being killed and denied their basic rights through t-shirts, posters and a symbolic message of oppression through chaining themselves. Several posters were erected in support of Bapu Surat Singh Khalsa who has been on a hunger strike since January 16th to free the political prisoners. 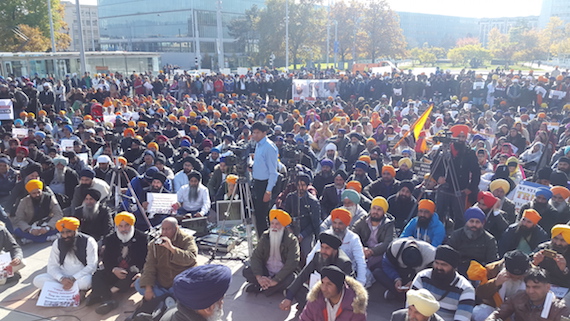 The key message of the event was for Western Nations to address the grievances of Sikhs and other minorities, before negotiating bilateral trade agreements, the need to continue to pressure India to address Sikh and other minority grievances and to stop the current state violence towards minorities. Most urgently there was a strong lobby in the speeches to have the United Nations enter into India and to consider some of the fact based reports about India’s treatment of minorities. The event was not “anti-Indian” which has been a common discourse used to deflect from India’s poor track record of human rights, rather, it was anti-nation states, who violate human rights. A meeting was held with two officers with the Office of the United Nations High Commissioner for Human Rights with a delegation of six peoples headed by Indira Prahst, Professor of Sociology and Anthropology, from Vancouver, Canada and Dabinderjit Singh with Sikh Federation United Kingdom and Harminder Singh Khalsa, Director of MAR, Four Delegates from European Gurdwara Committees were also present. The meeting was productive and informative as the officers listened attentively and took several notes to the facts presented to them on Sikh human rights violations. Direction was given on how to address the current human rights abuses against peaceful protestors in Punjab against the desecration of the Guru Granth Sahib ji, and the continued extrajudicial killings in Punjab and Kashmir. The delegates, addressed the violation of freedom of speech under the current laws of Sedition Section 124A of the Indian Penal Code, including freedom of speech on Khalistan in India. 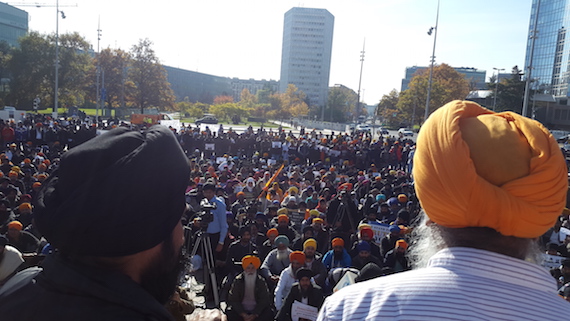 1) Genocide and Killings of Religious Minorities in India.
2) UN-led inquiry into the 1984 Sikh Genocide.
3) Prosecution of Police Officer involved in human rights violations in Punjab.
4) Release of Sikh Political Prisoners.
5) Oppression of religious and the minorities in India.
6) Recent attacks on the Sikh faith and killing of peaceful Sikh protesters.
7) Application self- determination to the Sikh and demand for an independent Sikh homeland Khalistan.

The Movement Against Atrocities and Repression (MAR) which was founded in (2004) to protect Human rights, provide relief to the needy, anti-racism, the right to uphold your identity, and dialogues for change” and the association with European Gurwdara’s wish to thank everyone for their support, including the Office of the United Nations High Commissioner for Human Rights and the Geneva Police who granted us permission and aided in achieving a peaceful and informative rally.