Chandigarh/ Mohali: In a recent TV interview to Shiromani Akali Dal Amritsar (Mann) president Simranjeet Singh Mann raised questions about validity, viability and rationale behind Sikh Referendum 2020 to be hosted by a US based Sikh groups called Sikhs for justice. He said that it was not possible for a private party to hold a unilateral referendum to create a Sovereign state. He also said that propaganda behind Sikh Referendum 2020 was misguiding. 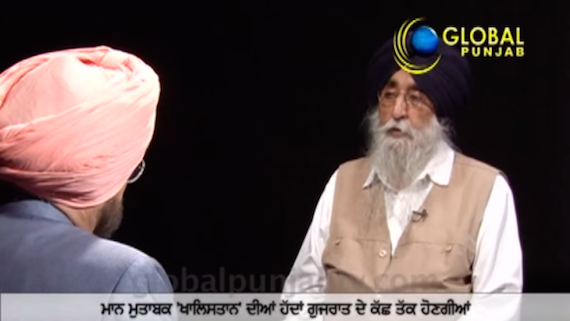 A still from Kanwar Sandhu’s One to One talk with S. Simranjeet Singh Mann | Photo Source: Global Punjab TV

On being asked specifically to share his views about Sikh Referendum 2020, former MP said “These things are going around but those who want to hold referendum by 2020 they should tell me … that referendum is what one country holds in that country, like British government held a referendum in Scotland last year. About these banners of referendum… can Sikhs for justice hold a referendum in cooperation with India? Misguiding people in this way …”

On being asked that if he was not in support of referendum 2020 by Sikhs for justice, S. Simranjit Singh Mann sad that he was in favour (of referendum) but it was not possible (this way). Legally and constitutionally it is only possible if a country holds a referendum itself or the United Nations’ Security Council hold the plebiscite, like a resolution was passed regarding Kashmir in 1948.

He further said that no private party like justice party (Sikhs For Justice) cannot go in United Nations (for calling out a referendum). (For this purpose) an independent country will have to take a stand and get a resolution passed, only then the United Nations would be able to enter in our issue.

“Sikhs For Justice have Legal Experts they should explain us that … legally and really… how it is possible?” he added.

In this 30 minutes one to one interview with the journalist Kanwar Sandhu, released on YouTube by Global Punjab TV, Shiromani Akali Dal Amritsar president also talked about his stand for Khalistan, current position of his party, election boycott of 1992, role of Capt. Amrinder Singh, Prakash Singh Badal and other traditional political leaders of Punjab.