Chandigarh: Shiromani Akali Dal Amritsar (Mann) has written an open letter to the Editor of The Tribune, an English vernacular having its headquarter in Chandigarh. In his letter Simranjit Singh Mann has criticised the policies of The Tribune that are allegedly biased against the Sikhs.

Please Refer to your first page self-congratulatory advertisement dated May 17, 2019 of your esteemed newspaper, a print which we give below: 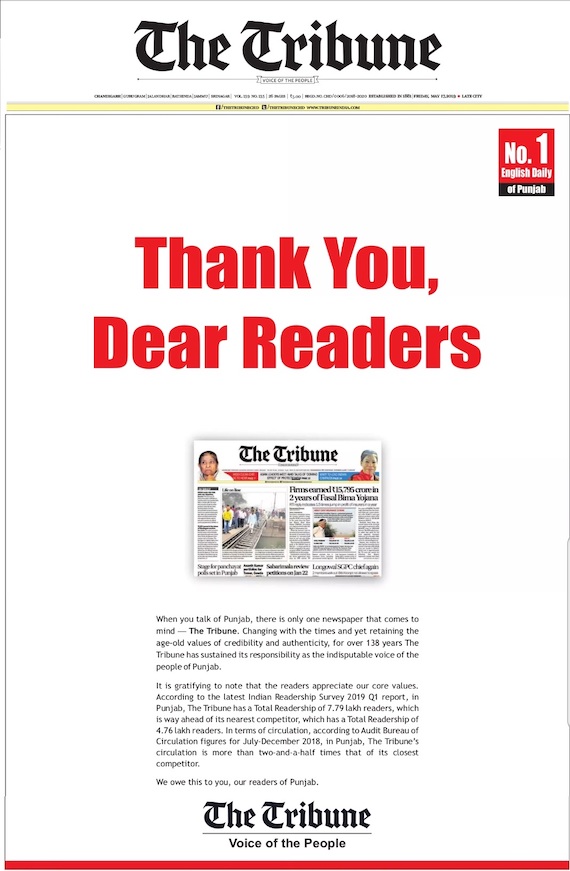 Our party Shiromani Akali Dal (Amritsar) is happy to note that your newspaper has spread its wings far and wide into the psyche of the Punjab. Our party has never doubted the popularity of your newspaper which we have inherited from the days it began its print in Lahore.

However, since 1983 your newspaper has supported the ruthless policies of the Hindu Indian state against the Sikh peoples. Before 1984 your editor Prem Bhatia supported the military action of the Indian Hindu state which deployed the armies of its own Hindu state, in tandem with the nuclear armed armies of Britain and the Soviet state, against the stateless Sikh peoples in what became to be known as the infamous Operation Blue Star of 1984. That is a black deed that your newspaper will never live down.

Subsequent to operation 1984, the Hindu state under Rajiv Gandhi committed the genocide of the Sikh peoples with impunity. Your newspaper has never sympathized with a Sikh people for the tyranny let loose on a minority Sikh People.

In fact all these years your newspaper has let loose a litany of abuse against the Sikhs and demeaned our stature all over the world by referring to us Sikhs as terrorists, extremists, hardliners and radicals. We do not think these are good manners and etiquette. In a civilized and democratic society it is the duty of the majority to take a minority along with it. But if the majority thinks that the minority should go along with it then the minority will seize to be a minority and would be gobbled into the omnivorous belly of Hinduism.

The crime of genocide perpetrated on the Sikh people, your newspaper has tried to minimize the gravity of this abominable crime and your newspaper always refers to it as a riot.

Your newspaper is well informed that the Ontario legislature of Canada and the legislatures of two states of the US, California and Connecticut have all passed resolutions in their respective assemblies that the Sikhs were subjected to the crime of genocide, with impunity, by the Hindu Indian state.

However, we wish you and your newspaper well on its gaining in popularity as your advertisement shows, but at the cost of the Sikh people and the ultra right-wing Hindu nationalist policies which your newspaper follows.

We hope your newspaper is aware of what the Reporters Without Borders have factually given in their report that the fairness, integrity and truthfulness of your country’s media stands at the 140th position out of 190 countries, they have examined and reported on. We hope your newspaper will take into account the voice of the World’s journalistic report. The emperor’s new clothes story should serve as a lesson for anyone who blows his own trumpet. Truth can never be hidden in spite of the backing of the nuclear armed Hindu Indian state.

The Hindu’s are a learned class but you have always thought of us Sikhs has hillbillies, fit to carry your country’s bayonets, stand in front of your five star hotels, with medieval military uniforms and salute your guests, usher them in and thereafter see them into their respective limousines, with a smart salute. But times have changed and we hope you will see the writing on the wall.