Amritsar: Bollywood star Akshay Kumar’s upcoming movie “Singh is Bling” seems to be caught into a controversy as Akal Takht Jathedar Gurbachan Singh has raised objections against movie’s promotional song and trailer that were recently released by the film makers.

Giani Gurbachan Singh warned the makers of “Singh is Bling” against misrepresentation and offensive use of Sikh article of faith “Kara”. 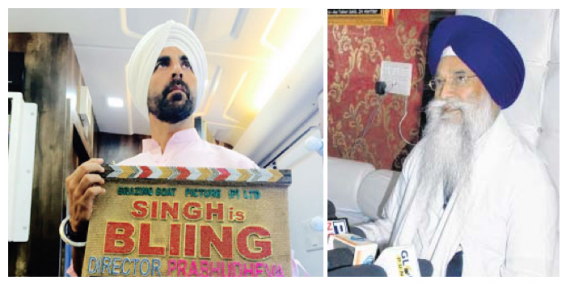 “It is highly objectionable that the filmmakers have compared Sachkhand Sri Harmandir Sahib with habit of alcoholism and other malpractices which amounts to grave offence against the Sikh religion and the Sikh people”, said Akal Takhat Jathedar.

He warned the filmmaker to remove such offensive contents from the film, failing which, he added, the film-makers will have to face strong opposition from the Sikh community.

Akal Takhat Jathedar said that the film-makers should refrain from violating the Sikh tenets while portraying Sikh symbols in their movies.