Sitting Judges Of SCI Express Anguish Over its Judicial Functioning, Wrote To CJI But In Vain, Said The Judges

New Delhi: A move that is termed first of its kind in the history of Indian judiciary, four senior-most Supreme Court of India (SCI)  judges – Justices Jasti Chelameswar, Ranjan Gogoi, Madan Lokur and Kurian Joseph here on Friday held a press conference in which they said that unless the institution is preserved, democracy will not survive in the country. 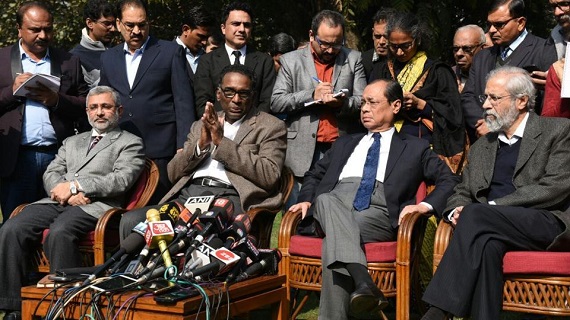 While interacting with the reporters present during the conference they maintained that there was an urgent need to preserce the judiciary system if democracy was to be protected, and that they failed to convince Chief Justice Of India Deepak Misra towards the same.

The reported conference took place at  Justice Chelameswar’s residence in New Delhi, in which he said that “We met CJI with a specific request which unfortunately couldn’t convince him that we were right therefore, we were left with no choice except to communicate it to the nation that please take care of the institution,” adding that a formal statement will be issued shortly, reads the quote from a statement published in Indian Express (IE).

It is alleged by the judges that their are grave discrepancies in the allotment of cases to the judges, “There is an issue of assignment of a case which is raised in that letter (to CJI),”Justice Ranjan Gogoi purportedly said. On being asked further if it is about the mysterious death of CBI Judge BH Loya, he said, “Yes”.