Dehlon/ Ludhiana: Another incident of Beadbi of Guru Granth Sahib Ji is reported from village Ghawaddi in Dehlon area of Ludhiana district. Sources present in the village told Sikh Siyasat News (SSN) that the incident is believed to have taken place between 12 am to 4 am when Granthi Singh was out to perform his duty at an Akhand Paath Sahib.

The beadbi of Guru Granth Sahib ji came into light at around 8 am as first 20 Angs of Guru Granth Sahib were found torn. Soon after the news of Beadbi spread out, Sikh sangat from Ghawaddi and nearby villages gathered at Dehlon-Sahnewal road and blocked the highway protesting against the incident. 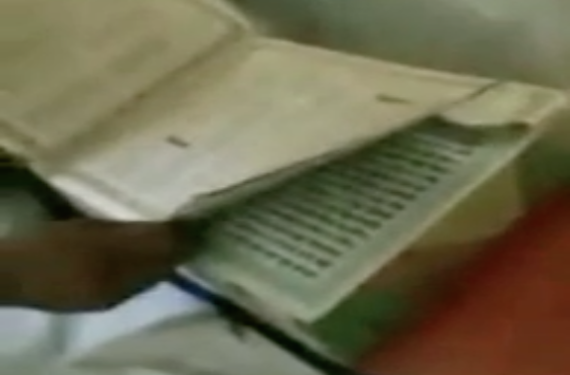 In sixth such incident of sacrilege in past one week, 20 Angs of Guru Granth were torn at Ghawaddi in Dehlon area of Ludhiana

Bhai Balkar Singh of Damdami Taksal told SSN that the district administration has deployed police force in Gawaddi village and the situation was quite tense.

The police registered FIR under section 295 (Injuring or defiling place of worship with intent to insult the religion of any class), 295- A (Deliberate and malicious acts, intended to outrage religious feelings of any class by insulting its religion or religious beliefs) and 34 (act done by several persons with common intention) of Indian Penal Code (IPC) 1872 at Dehlon police station against unidentified persons.

As per information, civil and police authorities held a meeting with the Sikh sangat this evening and demanded few days to find and arrest culprits. Sikh sangat is demanding that the Gurdwara Granthi and Gurdwara management committee members should also be booked for negligence. Sikh sangat rejected administration’s plea to lift the dharna.