Sikhs For Jusitce Legal Advisor, 4 others books by Punjab police under sedition at Capt. Amarinder’s directions

Chandigarh: Capt. Amarinder Singh has hit back at US based Sikh advocacy group called Sikhs For Justice by filing a case against SJF legal advisor and four others. SJF was considered to be responsible for blocking Capt. Amarinder Singh’s visit to Canada before Punjab state assembly elections. SJF had tried to initiate a lawsuit against Capt. Amarinder for his alleged role in Human Rights abuses in Punjab.

A press release issued by Punjab government states that the Punjab police on Thursday (July 06) filed a case against three USA-based persons, including the Legal Advisor of Sikhs for Justice (SFJ), along with two persons based in India, on charges of “sedition”, “promoting enmity and criminal conspiracy”. 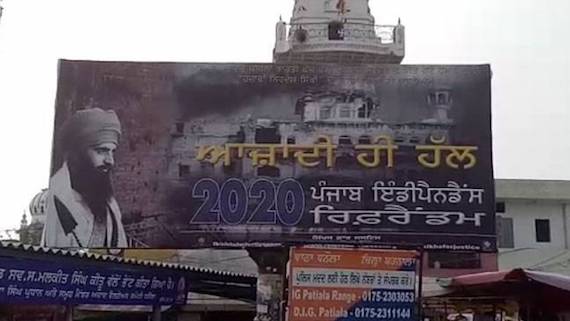 A hoarding affixed by SJF activists in Punjab [File Photo]

The statement further states that the case was filed “after Chief Minister Captain Amarinder Singh ordered a crackdown on the outfit amid complaints by the ‘local people’.” Notably, the Bhartiya Janta Party (BJP) activists had raised objections against certain hoardings related to Referendum 2020 in Punjab put up by Sikhs for Justice.

“The Chief Minister, who also holds the Home portfolio, has further directed the police to ensure that neither the SFJ, nor any other outfit succeeds in whipping up passions in the state, which Pakistan’s ISI could also exploit to its advantage”, reads the statement.

The Punjab government alleges that [a]ll five have been booked for promoting feelings of enmity and disharmony between different groups, and committing acts prejudicial to maintenance of harmony, through visible representations. Such acts have disturbed and are likely to disturb public tranquility in Punjab, and are further likely to cause fear/alarm, ill-will and a feeling of insecurity among members of different communities/groups residing in the border State of Punjab, the police said in its FIR.

Further investigations are in progress to uncover the various financial and operational linkages between persons based in Indian subcontinent and abroad, said the police spokesperson.

The police have further alleged that the SFJ had been actively trying to destabilize Punjab for the past several months.