While Indians take pride in calming that the Art (15) of our constitution provides for “Protection for Prohibition of discrimination on grounds of religion, race, caste, sex or place of Birth” yet there is very little evidence of its application across the higher education sector.

In fact five research scholars at University of Hyderabad (UoH) belonging to Dalit community were dumbstruck by the decision of the university to restrict their entry into hostels, administration building and other common places in groups and denial of permission to participate in students union elections. As an unjust administrative response to the incidents related to Ambedkar Students Association (ASA) Vs Akhil Bharatiya Vidyarthi Parishad (ABVP) on 3rd August 2015. The decision was an outcome of political pressure exerted by BJP Union Minister for Labour, Bandaru Dattatreya and BJP MLC Ramachandra Rao.

The aggrieved students Dontha Prashanth, Rohith Vemula, Vijay Kumar, Seshu Chemudugunta and Sunkanna feel that this decision of suspension by the University’s Executive Council without conducting any form of enquiry is no different from the ostracism subjected on the Dalit household in a typical caste dominant Indian village. The career threatening decision of suspension has indeed turned to be a body blow for the five victimized research scholar who claim that it is disheartening to see how their voice, freedom and dignity was completely abrogated in a moment’s notice by the people who supposedly exist to guide and protect them during their tenure at the university. 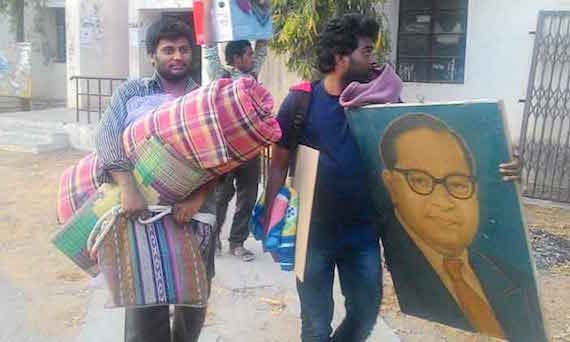 The punishments inflected upon them include

2) Suspension of the five students

3) Suspension of five students from hostels, barring entry into common places in groups, administrative building and hostels and preventing them from participating in student union election

On 03.08.2015 Susheel Kumar, President of ABVP-HCU Unit sparked off a massive controversy by referring ASA scholars as “GOONS”. His Face Book status read “ASA GOONS are talking about Hooliganism” when demanded an apology for this provoking statement Susheel Kumar tried to evade from controversy by relying that it was an emotional outburst in response to the ABVP VS Ambedkarites confrontation at Delhi university. However on account of his demeaning post he subsequently apologized in writing to the ASA in the presence of security officials.

But the events which unfolded in 4.8.2015 took everyone by surprise. Before one could hardly react, Susheel along with his brother who is a member of Bharathiya Janata Yuva Morcha started to levy heavy allegations on these five victimized scholars that both were beaten up by ASA students led by Dontha Prashanth. The tensions and drama reached its zenith when Ramchanchadran Rao BJP MLC, met then Vice Chancellor R.P. Sharma, who subsequently constituted an Enquiry committee under chairmanship of Prof. Alok Pandey.

The committee, after considering the deposition of security officer Dilip Singh, Krisha Chaitanya and Medical officer Dr. Anupama clearly indicated that the entire incident of the “demeaning of Provoking comment” was settled amicably with the writing of apology letter by Susheel Kumar to the ASA members. Moreover Dr. Anupama’s deposition stated that there was no evidence of Susheel Kumar sustaining any injury on account of being beaten up by anyone.

But completely contrary to Prof. Alok Pandey’s report, the Proctorial Board of the UoH claimed that :Susheel Kumar was abused, manhandled, beaten and forced to write apology letter by about 30 ASA members and as a result the five most active students Dontha Prashanth, Rohith Vemula, Vijay Kumar, Seshu Chemudugunta and Sunkanna summarily be suspended.

Following this a protest was organized against the injustice meted out to the five ASA members and as a result the then Vice Chancellor R.P. Sharma who after inviting an open discussion with ASA members, saw the fallacies of the enquiry and its decision henceforth immedialty revoked the suspension which is subject to constitution of a new committee to enquire into the incidents afresh.

However, the present VC, Prof. Appa Rao Podile without ordering any fresh enquiry took this undemocratic and space-curbing decision of suspension.

This UoH incident could be the perfect preface to the larger version of oppression and it places in comparison to the caste ridden Indian society which has unfortunately penetrated and shed its poision into the most highly esteemed institutions of this country. In Particular reference to exertion of political pressure by BJP, it is not unusual given the way both their muscle, money and political power is used to suppress the voice of Dalits and minorities.

Though one cannot tear down the whole stigma in just a day these courageous students believe that if this incident comes to the larger notice of the society, it could not only shower optimism about the power of one’s voice but can also reform, cleanse and make the system accountable and ensure for it’s not a “Choice” but a “Right”.