Chandigarh (August 3, 2014): Punjab Congress president Partap Singh Bajwa issued a show-cause notice to senior party leader Jagmeet Brar on Saturday (August 02) after his statement that party chief Sonia Gandhi and vice-chief Rahul Gandhi should take a two-year break. Brar, who made the statement in Delhi on Friday, was told to explain his conduct by August 5. 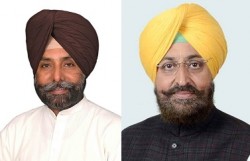 With a controversial statement, former Congress Working Committee member Jagmeet Singh Brar created a flutter that there was “no harm” if Sonia Gandhi and Rahul Gandhi take a two-year break in the wake of Lok Sabha poll debacle.

However, congress leaders including captain Amrinder Singh has opposed to his controversial statement, but ate his words later on and said that the congress was nothing without Nehru family.

“I am also saying that Congress President has contributed her best. But if she leaves the post for two years as a cool off period, she will be more acceptable later on,” Brar said.

Asked whether he was demanding that Sonia and Rahul should quit the party, he said, “I did not say this. What I said is that there is no harm if they take a break for two years, some kind of a cool off period.”