London: South Asian activists in England came together on the evening of 26 January, observed as Republic Day by the Indian State, in a moving candlelit protest in remembrance of victims of Hindutva forces in mob lynchings, murders and assassinations, with protesters holding large photographs including those of Junaid Khan, Pehlu Khan, Pastor Sultan Masih, Zafar Hussein, Otara Bibi Afrazul Khan. They also highlighted the assassination of Gauri Lankesh for courageously exposing the Hindutva activities and the mysterious death of CBI judge Justice Loya. 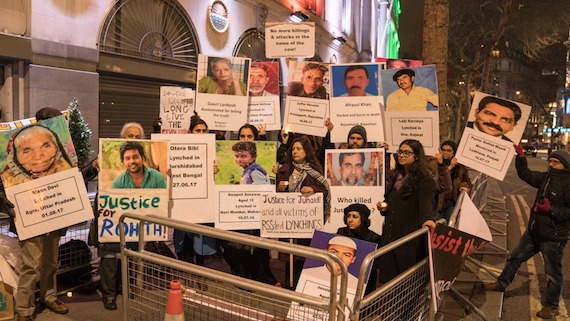 It is notable that less than a week ago a groups of South Asian organisations and Dalit bodies had marched to hand in a memorandum to Indian President Kovind only to be told that their letter was not to be accepted under orders from the Indian government. 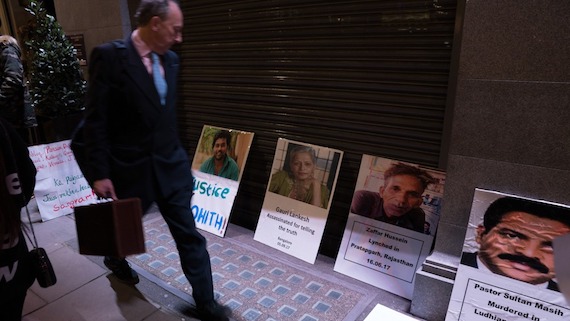 Another view of protest bySouth Asian groups and Dalit Activists in London on India’s republic day on January 26, 2018

In a statement issued on January 26, South Asia Solidarity Group and the SOAS India Society said, in their statement:

‘The Indian government maynot want to see our letter but the Modi government has nowhere to hide because the world is watching its crimes against its own people.’

The protest’s main demands were:

Nirmala Rajasingham on behalf of South Asia Solidarity Group said: ‘We stand with the many, many Indians who are rising in grief and rage against the horrific violence choreographed by the Hindu supremacist Modi regime and its openly fascist parent organisation the RSS. Here in the UK too these Hindu organisations are spreading their casteist venom and virulent Islamophobia. We will continue to confront them as we pledge to resist India’s descent into a Republic of Fear ‘ 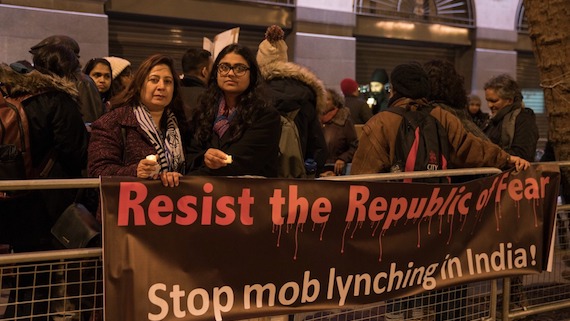 Rutuja Deshmukh of SOAS India Society said: ‘From the lynchings of Muslims in the name of the cow, to the attack on a school bus over a film, and Justice Loya’ s mysterious death, there are more than enough reasons to conclude that the Indian state is turning into a fascist regime sooner than anyone imagined. It is our duty as responsible citizens to resist this advent of fascism.

Satpal Muman of the Dr Ambedkar Memorial Committee of Great Britain which also supported the vigil said: We are deeply concerned about the horrific attacks on Dalits which have escalated vastly under the Modi regime, about the hatred and violence against minorities and on all those who simply tell the truth. We cannot stand by while the democratic fabric of India is being threatened by the rise of Hindu supremacy

“Also present at the vigil was Imran Dawood who had witnessed the murder of his family members who were visiting Gujarat on holiday from the UK, during the Gujarat massacres of 2002, while present Indian Prime Minister Narendra Modi was the Chief Minister of Gujarat”, reads a statement issued by the organisers of the protest.

The statement of the organisers South Asia Solidarity Group and the SOAS Indian Society reads as follows:

This year has seen a continuation of the epidemic of mob lynching in which Muslims have been the main target. Whether the pretext has been claims of eating beef, cattle trading, so-called ‘love jihad’ or simply travelling while Muslim, these attacks have been instigated and organized by the network of vigilante groups and paramilitaries linked to the ruling BJP government and the openly fascist organisation which inspires and directs it, the RSS. Those who have been brutally murdered range from 15-year-old Junaid beaten to death in a train in UP, to Pehlu Khan lynched by cow vigilantes on a Rajasthan road.

Their deaths have been met by resounding silence from the Prime Minister, justifications from his ministers, and waves of celebration from the army of hideously abusive online right-wing trolls, many of whom are followed by Narendra Modi, the man who himself oversaw the 2002 genocide of Muslims in Gujarat when he was Chief Minister.

On December 6, millions of people witnessed the horror of Afrazul Khan, a migrant worker from Bengal, being hacked to death and burnt alive in Rajasthan, with the carnage being sickeningly videoed and circulated online by the perpetrator and his 14-year-old nephew. That the perpetrator Shambhulal was very far from a mentally disturbed lone wolf was confirmed by the celebrations of his crime and the protests against his arrest organized by the Hindu right wing organizations linked to the government, culminating in the replacing of the Indian flag by the saffron flag (representing Hindu supremacist power) atop the High Court building in Udaipur. Equally chilling was the fact that the murder was clearly pre-planned to take place on the anniversary of the demolition by RSS footsoldiers of the historic 16th century Babri Masjid (mosque) in 1992.

December 2017 saw the continuation of attacks on Christians which have involved brutal assaults on churches and pastors, with the authorities colluding in the persecution of people celebrating Christmas in BJP-ruled Madhya Pradesh, where carol singers were first attacked by Hindu right-wing groups and then arrested by the police.

This year has also seen the intensification of attacks on Dalits, and brutal attempts to crush their ongoing resistance to caste oppression, by the forces of the Hindu right. In UP where the rabidly communal and casteist hate preacher Yogi Adityanath was made Chief Minister in March 2017, we witnessed the burning of Dalit villages and the sexual assaults on Dalit women by upper caste mobs in Saharanpur. This was followed by the arrest of Chandrashekhar Azad (Raavan) the leader of the Bhim Army, a Dalit Human Rights Group. While Chandrashekhar Azad was granted bail by the Allahabad High Court on November 2, with the court observing that charges against him were “politically motivated” , the very next day the Uttar Pradesh government slapped the National Security Act (NSA) against him in an effort to silence him.

Most recently, as 2018 began, Hindu right wing terror groups carried out attacks on thousands of Dalit families who had gathered at Bhima Koregaon village in Maharashtra to commemorate the 200th anniversary of a battle which is central to Dalit identity.. Instead of arresting the key organisers of this violence (one of whom is a close associate of Modi) the police have carried out a witch hunt of Dalit youth and children, beating them up and arresting them on fabricated charges and telling their parents that these minors will be in prison for years.

Meanwhile the Modi government is ruthlessly seeking to silence all those who dissent from its agenda of creeping fascism. The cold-blooded assassination on 5 September 2017 of the courageous journalist Gauri Lankesh in Bangalore, who had fearlessly criticized and exposed the BJP and its associated groups, brought thousands onto the streets in mourning and protest. While the mainstream media have become loyal mouthpieces for the Modi government, whipping up hysteria against all those who criticize the government, alternative critical media outlets like The Wire have been threatened with massive lawsuits when they expose the terror unleashed by the Modi regime and its endemic corruption. We learnt too about the suspected murder of Justice Loya, the judge who dared to insist that Modi’s right- hand man Amit Shah appear in court in the Sohrabuddin murder case. And now the interference by the Modi-appointed Chief Justice in the investigation of Justice Loya’s death has led four of the five senior-most Supreme Court judges to take the unprecedented step of holding a press conference to warn of the ‘danger to democracy’ posed by the Modi government. Meanwhile, BJP leaders like Union Minister Anant Kumar Hegde have openly stated their intention to get rid of the Indian Constitution drafted by Ambedkar and its basic principles of liberty equality and fraternity, replacing it with the caste supremacist and misogynist principles of Manusmriti!

At the same time in Kashmir, where the people have long been fighting for their right to self-determination in the face of acute state repression and military occupation, atrocities have further escalated. The BJP, now also sharing power in Srinagar, has shed all pretence of constitutional governance, treating Kashmiris as virtual prisoners of war, and even a tentative recognition of the humanity of Kashmiri youth by a government official is treated as seditious.

As India descends rapidly into open fascism, we cannot afford to remain silent. We must stand by those whose very existence is under threat. We must show our solidarity with the thousands taking to the streets in India in protest against mob lynching, atrocities on Dalits, assassinations of dissidents and the Islamophobic, caste supremacist far-right regime of Narendra Modi.