Srinagar: Indian administration hosted a by-poll in Srinagar today which witnessed 6.5% voter turnout amidst strong protests from Kashmiris. According to Times of India (ToI) at least 6 persons were killed and several injured after Indian forces opened fire on a mob of protesters in Srinagar during by-elections.

As per reports in Indian Media at least 70 polling stations were shut due to protests by Kashmiris.

A report in First Post notes that more than 100 members of Indian forces were injured in clashes with protesters in Srinagar. 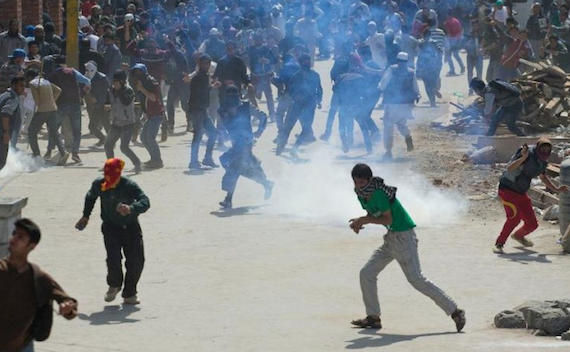 According to First Post Jammu and Kashmir chief electoral officer Shantmanu, said that a re-poll is likely in Sringar considering the poor voter turnout.

“I cannot say anything about the re-poll as of now; the figure can be anywhere around 50 or 100 polling stations or more than that,” PTI quotes Shantmanu.

Notably, pro-freedom Kashmiri group Hurriyat Conference had called for boycott of by-election. Group leader SAS Geelani has said in a written statement that ‘participation in elections tantamount to treason with martyr’s blood’.