New York, NY: A prominent Sikh American actor and designer, Waris Ahluwalia, was prohibited from boarding an Aeromexico flight from Mexico City to New York City on Monday, February 8, 2016, because of his turban. Mr. Ahluwalia complied with all security protocols, including an extra security search, when officials demanded that he remove his turban. After Mr. Ahluwalia refused to remove his turban, he was told he would not be permitted to board the flight or fly with the airline.

Mr. Ahluwalia contacted the Sikh Coalition from the security gate and together we devised a communications, legal, and advocacy plan to address this civil rights violation. Our communications and media strategy successfully engaged more than 600 media outlets internationally across print, TV and radio including CNN, Associated Press, BBC, Variety, the New York Times and People Magazine, educating hundreds of millions globally. To see a more detailed list of media coverage click here. 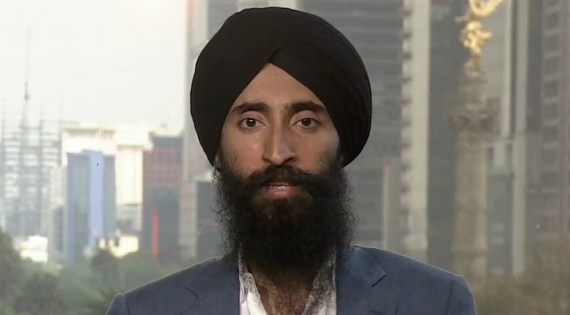 In addition to sharing his story with countless media outlets, the Sikh Coalition contacted Aeromexico on Mr. Ahluwalia’s behalf, submitted a detailed complaint letter to their legal counsel and engaged in extensive negotiations over the past two days. In partnership with Mr. Ahluwalia, we requested a public apology, Sikh awareness training for airline employees, and training on protocols for screening passengers with religious headwear.

When Aeromexico initially failed to meet these demands, Mr. Ahluwalia decided to stay in Mexico City until his requests were met. From there, he conducted numerous interviews and spoke to countless reporters. He highlighted both his mistreatment and that of Sikh Americans and other minority groups in the current climate of fear. He also highlighted the urgent need to address historic systemic injustices. Meanwhile, the Sikh Coalition worked closely with Aeromexico to ensure that the company acceded to Mr. Ahluwalia’s requests.

Late last night, we received confirmation that Aeromexico accepted our demands. “In addition to publically apologizing for Mr. Ahluwalia’s mistreatment, Aeromexico has issued a directive to its staff regarding the religious significance of the Sikh turban and plans to make a formal request to the TSA and the Mexican government to implement religious and diversity sensitivity training regarding screening of passengers with religious headwear into airport security training curriculum,” said Harsimran Kaur, legal director of the Sikh Coalition.

Mr. Ahluwalia left Mexico City this morning, happy with the resolution, and on the same Aeromexico flight that he was prevented from boarding on Monday. He will arrive in New York City this afternoon for Fashion Week. We are pleased to report that this time he was not asked to remove his turban during secondary screening.

“I am thankful for the Sikh Coalition’s unrelenting support from the moment I was denied boarding,” said Mr. Ahluwalia. “Forty-eight hours later, I am boarding another Aeromexico flight and am grateful that together we were able to use this opportunity to educate and effect change.”

The Sikh Coalition also plans to contact the U.S. Transportation Security Administration to demand clearer and consistent guidelines for foreign airlines when screening passengers with religious headwear. Sikhs are not required to remove their turbans during domestic travel unless the article of faith triggers an alarm, and only then as an option of last resort and in private. Foreign airlines that fly into the U.S. – and must comply with TSA procedures – should be subject to the same rules.

As always, the Sikh Coalition urges Sikhs to practice their faith fearlessly.