Struggle for release of Sikh prisoners can’t be crushed through repression: Sarna

New Delhi: Hitting out hard at Punjab Chief Minister Parkash Singh Badal for justifying repression on fasting octogenarian Sikh veteran Bapu Surat Singh Khalsa, his supporters and sympathisers, Delhi Akali Dal President Paramjit Singh Sarna asserted the struggle for the release of Sikh prisoners could not be crushed through despotic methods. He said these prisoners lodged in jails in various states would have to be released as the fast undertaken by Surat Singh Khalsa for this purpose was fully justified.

In a statement, Paramjit Singh Sarna said that Punjab Chief Minister Parkash Singh Badal and his government were using oppressive tactics to suppress the rightful struggle by Sikh organisations for the release of Sikh prisoners.

He regretted that instead of approaching this sensitive issue relating to the brazen violation of human rights from the humanitarian and political aspect, Badal had entrusted it to Director General of Police Sumedh Saini whose credentials were that of being anti-Sikh and was notorious for killing Sikh youth in fake encounters. 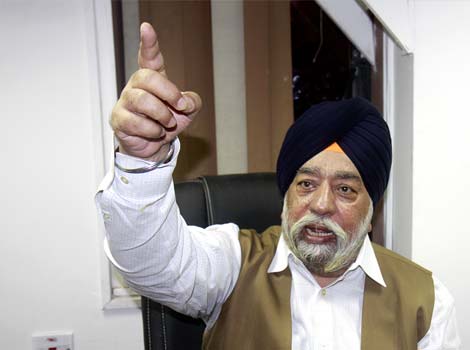 Sarna also questioned Badal in case the killers of Sikh youth like Gurmit Pinky and DSP Jaspal Singh could be prematurely released, what stopped the government from releasing Sikh prisoners who had spent more than 20 years in jails.

Referring to the legal aspect of the issue as articulated by eminent lawyer H S Phoolka and Justice (retd) Surinder Singh Sodhi that the stay on pre-mature release applied only to the state governments, Sarna called upon the Chief Minister to take up the issue with his “own government” at the centre which should not be a problem issue with Harsimrat Kaur Badal being minister in Narendra Modi cabinet.

He, however, expressed the apprehension that Badal lacked guts to pressurize the centre as he lacked moral force after begging for the induction of his daughter-in-law in the Modi cabinet.

He appealed to the workers and leaders of the Shiromani Akali Dal headed by Sujkhbir Singh Badal to come out in support of the struggle launched by Surat Singh Khalsa and leave Anti-Panthic Badals in case they still had some commitment to the Panth.