This is first visit of SAD (Badal) president Sukhbir Badal to the memorial that was built in 2013. 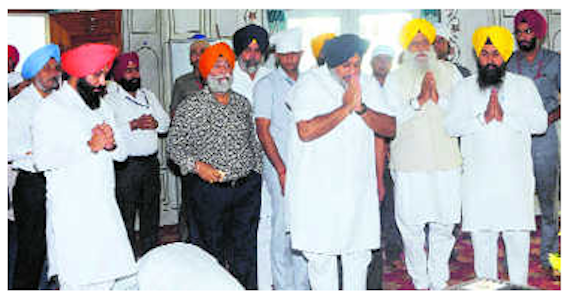 Later lashing out at Delhi CM Arvind Kejriwal, Sukhbir held him responsible for hurting the Sikh sentiments by getting the Bhai Mati Dass Chhabil at Gurdwara Sis Ganj Sahib demolished. He equated the act of destruction of Bhai Mati Dass chhabil near Gurdwara Sis Ganj Sahib with Indian Army’s attack on Darbar Sahib and other Sikh Gurdwaras in June 1984 in which thousands of Sikhs were massacres by the Indian Army besides damaging the Akal Takht Sahib with Tanks.

Sukhbir said Kejriwal, who intended to jump in the poll fray in Punjab, remained so insensitive towards the concern of Punjabis that his MLA Alka Lamba didn’t refrain from demolishing the century-old Bhai Mati Dass Chhabil.