Shanghai (May 8): Punjab Deputy Chief minister Sukhbir Badal today announced that the “world’s largest high end and electric bicycle manufacturing facility” with a capacity of 15 million cycles would be established at Ludhiana over 300 acres of land.

Addressing a joint meeting of the Indian and Chinese bicycle associations at the China Cycle 2016 exhibition in Shanghai, the deputy chief minister said “we are the world leader in manufacturing of the common man’s cycle. But now the demand is for high end as well as electric cycles. We are inviting world players to set up shop in Punjab. The local industry will also be benefitted as we are requesting then to tie up with world manufacturers for providing ancillary support”.

As per a release issued by Deputy CM’s office, Sukhbir Badal announced the facility, which would be known as Cycle Valley, would initially provide employment to 1.5 lakh persons and go up to 4.5 lakh persons once it reached its full potential. 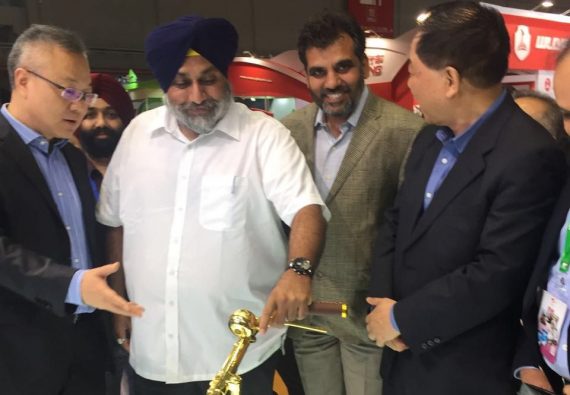 He said the mega project would revolutionise bicycle production in India as well as the world. “We expect Punjab to become a hub for export of high end bicycles as creation of a unique eco system will result in a reduction of costs by up to 20 per cent. Industry will benefit due to manufacturing units and ancillaries being housed in one location”.

Mr Badal announced that Hero would be the anchor client as well as strategy partner for the Cycle Valley and that the best manufacturers and ancillaries in India and abroad would be invited to set up their facilities at the valley. “We are offering pre cleared sites to all investors along with quick clearances and I assure you will have no problem in setting up shop in Punjab as it has been rated as number one in ease of doing business in India”.

Urging bicycle companies across the world to invest in the Cycle Valley, the deputy chief minister said there was immense scope in manufacturing high end cycles as lifestyle products. He said bicycling in cities was also likely to catch up once more than 100 cities in India were upgraded to smart city level under which they would all have special bicycle tracks.

Speaking on the occasion China Bicycle Association president Ma Zhaoyang Wang said the cycle industry in India and China shared a lot of commonalities. He said the CBA was ready to hold hands and walk together with the industry in India. He said there was a huge scope for high end as well as electric cycles.

Leading Chinese company – Phoenix Dr Zhaoyang Wang called for giving a push to developing cycle components in Punjab. He also called for the need to promote cycling to give a further fillip to the industry in Punjab.

Hero Cycles Chairman Pankaj Munjal while thanking Mr Sukhbir Badal for coming up with the Cycle Valley concept, said the Cycle Valley would witness sales going up from US one billion dollars to 5 billion dollars because exports would ride on a modernised eco system. He said a US University would do the design interface for the Valley and it would also have a high tech testing laboratory to meet European standards besides an Experience centre and a Cycle testing track. He also announced that the Asian Bicycle Association was holding its conference in Punjab in December this year.

Giving details of the Cycle Valley, Additional Chief Secretary Investment Karan Avtar Singh said investors desiring to set up shop in the Valley would be assured pre cleared sites, cheapest power in the country, availability of trained manpower as well as the best incentive and labour policy.