Sukhbir Badal Condemned Vandalism of a Gurudwara in Calagary

A press release issued by Department of Public Relations (Punjab) Sukhbir Badal has urged India’s External Affairs Minister Sushma Swaraj to take up this act of vandalism with Canadian government to ensure that miscreants should be put behind bars at the earliest.

“Expressing concern over attempts to disturb communal harmony through acts of sacrilege and vandalism in India and abroad, Deputy Chief Minister urged Sushma Sawraj to ask the Canadian government to apprehend those behind the Calagary incident and take steps for security at the gurdwaras”, reads the statement. 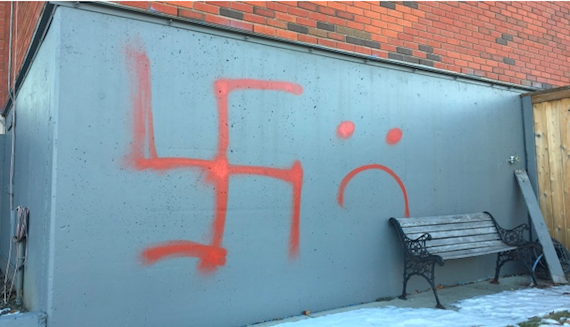 The statement further reads: “[e]xpressing concern over occurrence of such incidents in the recent past, Sukhbir Badal said that he would discuss the matter with the Punjabi leaders in Canada. Appealing to Sikhs all over the world to maintain peace and communal harmony, Shiromani Akali Dal President said that Sikhs would not let anyone to provoke them for their petty politics. He said that this was the high time that entire Sikh community should work in unison for the betterment of the entire humanity”.

Notably, Punjab government has itself failed to book or find the culprits of beadbi of Guru Granth Sahib at Bargari and other places.