Chandigarh/ Mohali: As per a release issued by the Office of Deputy CM of Punjab, Sukhbir Badal conducted surprise check along with and Punjab DGP Suresh Arora during last night (May 5) to check patrolling and police nakas in three districts.

Disclosing this media advisor Deputy CM, Jangveer Singh informed that both conducted surprise checks from 11 am to 2 am in SAS Nagar, Fatehgarh Sahib and Patiala districts to verify police patrolling and working of police at night hours.

Sukhbir Badal also visited a police post and police station at Sirhind and Fatehgarh Sahib besides some busy markets and highway in SAS Nagar during this inspection. 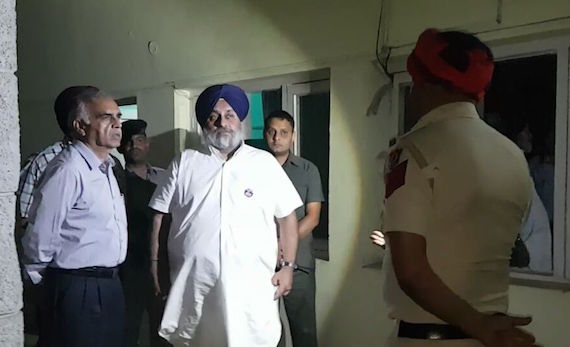 As per the official press release, Deputy CM informed that all night duty officers were present in police stations which they visited. Deputy CM has warned all the field police officers to be punctual on duty and maintain strict vigil otherwise strict disciplinary action would be initiated. Besides this, he has also directed the DGP to ensure effective police patrolling and put special nakas during night at vulnerable points in the towns for safety and security of citizens.

As per release [g]iving further directions to the DGP, Sukhbir Badal asked to increase number of police personnel in the police stations so that efficiency of working is not compromised. Deputy CM also gave instructions regarding deployment of PCR vans fitted with GPS systems so that their location could be tracked.

“On the occasion, the DGP Arora apprised the Deputy CM that rationalization drive would be carried out soon in the police force and necessary staff would be deployed in those police stations that are facing staff crunch. The DGP further elaborated that this drive would also strengthen night patrolling where needed staff would be made available” the release reads further.