The suspension has been ordered following a recommendation of the SIT formed after the sacrilege of Sri Guru Granth Sahib ji in Faridkot district some time back.

The SIT headed by ADGP IPS Sahota, Director Bureau of Investigations, went into the entire sequence of events following the disappearance of the Sri Guru Granth Sahib from Faridkot. Charanjit Sharma was SSP Faridkot when a Saroop of Guru Granth Sahib was stolen from Gurdwara of Burj Jawahar Singh Wala. He was presently posted as SSP Moga. 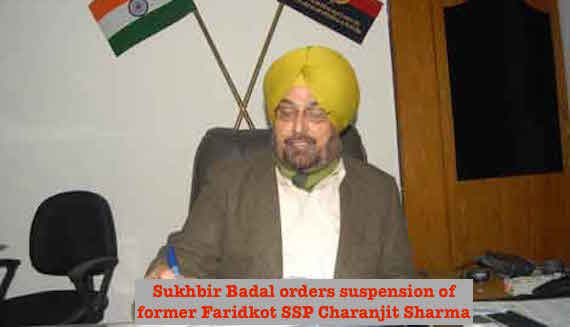 It is notable that Badal Government faces public anger due to total failure of state machinery to proceed against culprits responsible for theft of Guru Granth Sahib in Jawahar Singh Wala (in June) and sacrilege of Guru Granth Sahib in Bargari (in October). Besides the police opened fire on Sikhs at village Buttar (on Oct. 13), Kotkapura and Behbal Kalan (Oct. 14), in which two peacefully protesting Sikhs were killed and many others were injured.

Police firing triggered strong reactions from Sikhs across the state and Punjab observed shut down on October 15. Political observers opine that the Badal government is in an attempt cool-down the anger as such eruption could even lead to fall of the Badal government in present unstable political scenario of the state.

Badal government had announced formation of SIT to arrest culprits responsible for sacrilege of Guru Granth Sahib besides ordering judicial inquiry in to all incidents related to this matter. Deputy CM Sukhbir Badal announced Rs. 1 Crore cash prize for any lead on culprits. But the Sikh Sangat seems in no mood to get impressed by Badal government’s moves as the steps were announced too late (after two peacefully protesting Sikhs were gunned down by the police).

Reports received from all across the Malwa region disclose that Badal Dal leaders and SGPC members affiliated to Badal Dal are facing massive opposition from the Sikh masses.