Chandigarh: As per a written release issued by the office of Punjab deputy CM Punjab, Sukhbir Badal sought three commitments from the Punjab police, firstly zero tolerance policy towards drugs, end of corruption and end to the practise of registering false case.

Notably, the Punjab government has been under severe criticism from the opposition on these three issues. Opposition have been slamming the Badal government for wide-spread drugs abuse in the state. Even Punjab Cabinet minister Bikram Majithia was named as ‘kingpin’ of drugs smuggling in Punjab by former Punjab police DSP Jagdeep Bhola, who is now facing charges in a multi-crore international drugs racket.

During a piping ceremony held at Panjab University law auditorium in Chandigarh on April 30, Sukhbir Badal exhorted the police officers to take these three pledges in order to promote police-people relations in a constructive manner. 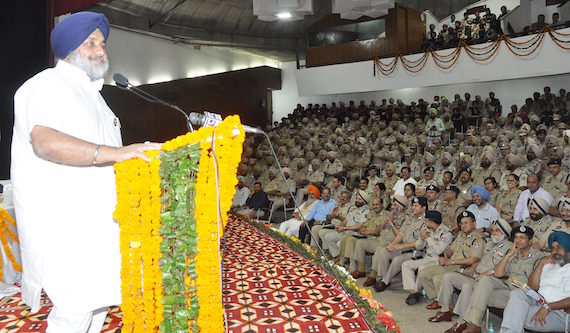 As per release Sukhbir Badal also warned that corrupt officials would be weeded out from the force and asked the DGP Suresh Arora to prepare a list of such dishonest reprobates. Advocating to transform the current perception of police Deputy CM assured that no dearth of funds would be allowed to come in the way of for modernization of police force and fastest promotions to the personnel would be given top priority.

Parts of the press release reads as follows:-

He said that it is his endeavor always to resolve problems of Punjab Police so that the force can wholeheartedly immerse itself in the task of better policing, tackling crime and nabbing anti-social elements. Emphasizing that Punjab Police is one of the best forces of India Mr. Badal batted for more strengthening of the force and said as many as 3000 promotion would be effected taking the total number of promotions to 20,000 in previous 9 years. He also announced that dial 100 service would also be available for rural areas of state in the coming months.

Stating this Sukhbir Badal said it was the SAD-BJP government which has always taken care of all the sections of the society and more than one lakh youth have been provided government jobs during its previous tenure and 1.20 lakh jobs will be given to the youth in various departments in the coming months

Divulging more Mr Badal, who also holds home portfolio, said after finalization of seniority decks have been cleared for promotions in the Punjab Police at all ranks and over 3,000 promotions of police officials would take place in coming days. To reduce stagnation in the ranks of police force he said government has decided to grant rank of head constable (personal rank) to those constables who have completed 16 years of service very soon. Deputy CM assured that no police officer would be reverted as government has decided to protect their ranks and pay in the armed battalions.

Elaborating plans for the modernisation of state police Sukhbir Badal said Punjab government has allocated additional funds to the tune of Rs 107 crore under modernisation which includes ultra-modern weaponry, latest security gadgets, sufficient number of two-wheelers and four wheelers for quick response teams in rural areas to further enhancing its efficiency especially ensuring quick response. He said “our plan is prepare our state police for the challenges of future to make it most professional force of the country equipped with latest gadgets and IT techniques”.

On the occasion, DGP, Punjab, Suresh Arora assured that all police personnel would fulfil the commitments made before the Deputy Chief Minister and said police would leave no stone unturned to come up to the expectations.

He said that to fix a common seniority in the police was a complex matter and it was finalized after a period of 20 years as the issue was under scrutiny of high court where several writs were filed by the claimants. Giving details he informed that as many as 343 promotions have been effected in this week in which 88 DSPs have been promoted as SPs, 102 Inspectors have been elevated as DSPs whereas 153 sub-inspectors were promoted as inspectors of police. DGP Arora revealed that about 900 promotions would also take place in July this on completion of promotional courses-lower school course, intermediate school course and upper school course which includes SI, ASI and HCs.