New Delhi: Punjab Deputy Chief Minister Sukhbir Singh Badal today alleged that the Congress party has ties with the “terror groups”. The statement of Sukhbir Badal, as covered in various Indian media outlets (as the copy of original statement was not available with the Sikh Siyasat News) reveals that the head of ruling Shiromani Akali Dal (Badal) tended to label the Sikh organisations that organised the Sarbat Khalsa 2015 on November 10 as the (alleged) “terror groups”.

Addressing a press conference at New Delhi, junior Badal alleged that the Congress leaders shared stage with (so-termed) “radical and separatist elements” at a recent gathering in Amritsar (reference to the Sarbat Khalsa 2015), where demand for Khalistan was allegedly raked up. SAD (B) chief was accompanied by party MPs Prem Singh Chandumajra and Balwinder Singh Bhundar during the press conference.
Punjab govt’s deputy also met Indian Prime Minister President Pranab Mukherjee and demanded that action should be taken against Congress and the party should be “de-recognised”. 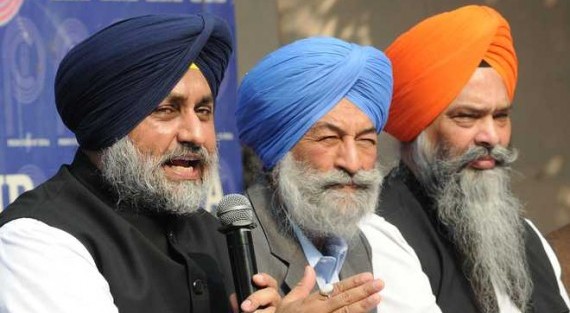 Notably Dy. CM Badal and his party has been under strong criticism form political opponents, including the Congress, BSP and the Aam Aadmi Party besides Sikh sections – including the Sikh pracharaks and the Panthic organisations for allegedly derailing the Punjab and damaging the Sikh institutions.

Recently Sikh pracharak Bhai Panthpreet Singh strongly criticised the ruling regime of Punjab and posed five questions to the Badals asking them to clarify that if speaking for the Panth was an act of “hardliners” then how could they term their past positions as “soft-lines” when they used to make anti-government gestures while pretending to take up the Sikh issues.