AMRITSAR: In what could be seen as act of endorsing the clean chit given by Central Bureau of Investigation (CBI) in its closure report submitted to its special court in Mohali in the cases related to beadbi of Guru Granth Sahib, the Shiromani Akali Dal (Badal) chief and Ferozpur MP Sukhbir Singh Badal has stated that the report has made it apparent that persons were arrested by Police during Congress regime in these cases illegitimately.

The arrested persons were Sirsa based controversial dera, about whom the CBI has stated in the closure report that they were not involved in the sacrilege incidents took place in 2015. Of three persons arrested, prime accused namely Mohinder Pal Bittu was murdered by fellow inmates on June 22 this year in Nabha jail. The finding came to public domain after the special court handed over copies of the closure report to three complainants in the cases. 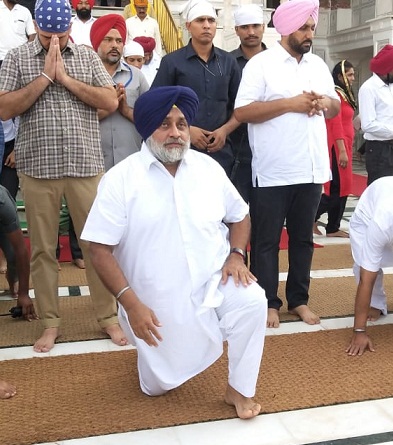 After paying obeisance at Darbar Sahib here along with his wife Harsimrat Kaur Badal, Sukhbir backtracked on the statement he and his party issued earlier. He had slammed the CBI for this closure report and rejected it outrightly. However, on Monday, he went quite soft on the findings of the CBI in this report that states that the investigating agency has found no evidence to prove involvement of the dera men.

“In the closure report, it has become apparent that the probe conducted by Congress-led state government was false. Punjab government claimed that it has cracked the case and arrested the perpetrators. In reality, it was done by the Congress government to ensure its victory in the elections.  it was disclosed by the agency point wise that it was wrong on technical grounds”.

Notably, independence of the CBI is being questioned nowadays and it is being alleged that CBI works on directions of the union government. Sukhbir endorsed this fact as well. He said,“But, our Shiromani Akali Dal raised this issue with the union home minister Amit Shah. Now, we are also visiting Prime Minister Narendra Modi to urge them to issue directions to the CBI to revoke this report”, he said. “First justice should be done in this case”, he added.

He again trained guns on Punjab Police DIG Kunwar Vijay Partap, member of the SIT probing sacrilege and Behbal Kalan-Kotakpura firing on Sikh sangat by the Police. However, he remained silent on the SIT led by Deputy inspector general (DIG) Ranbir Singh Khatra, which arrested three dera followers as accused in Bargari sacrilege case and claimed that it has solved the case.

DIG Ranbir Singh Khatra hit the headlines few months ago when he appeared in the TV interviews in which he stated that not only Congress government, but SAD-BJP government also gave him full support to solve the cases and arrest the culprits. The SAD leaders claimed credit citing that Khatra-led SIT was constituted during theirs regime in November 2015.