Sukhbir Singh Badal had went to village Nikke Ghumman in Gurdaspur district along with SAD (B) leader Bikram Singh Majithia to attend a Samagam on the occasion of barsi of Baba Hazara Singh Nikke Ghummana Wale. 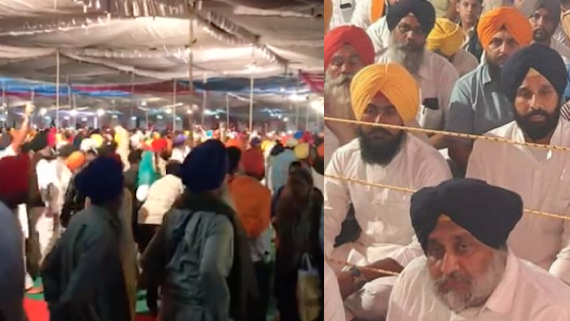 As soon as Sukhbir Singh Badal came and an announcement was made inviting him to address the gathering, people started standing up and raising slogans against him.

As the organisers kept inviting Sukhbir Singh Badal and Bikram Singh Majithia to reach at the stage to address the Samagam, people left the pandal in protest. Within minutes, the entire pandal was empty.

The protest gains significance as it was a spontaneous response of the Sikh Sangat against SAD (B) top leader.

Notably, after the release of Justice Ranjit Singh Commission’s findings, ill-deeds of SAD (B) stand exposed before the Sikh masses of Punjab and protest against Badals is gaining momentum.