New Delhi: The Supreme Court of India today permitted the states to exercise their power to remit the sentences of life term convicts if they have already served more than 14 years imprisonment.

The order of the Supreme Court was not available on the website of the SCI at the time of writing this news, therefore the Sikh Siyasat News (SSN) was not able to analyse it. But the reports in media suggest that the SCI order tends to contribute to the process of “centralisation” of powers with in the Indian state system, as it has put restrain on use of constitutional powers of the state governments where some central enactment like TADA or Central Agency like CBI was involved in the case. 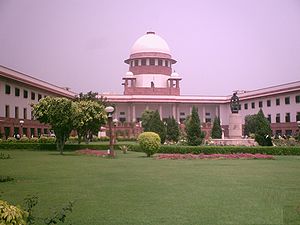 As per information the court said that the relief of remission by the State governments would not extend to life convicts who were sentenced to life under central laws such as TADA and for gruesome crime of rape with murder.

It also said that the states cannot release those who have been awarded life sentences in cases investigated by the central probe agencies like CBI.

The court also said that the remission of sentences would not be allowed in those cases where the court has specified the period of life imprisonment, like 20 years or 25 years jail term.

The court also recorded that Rajiv assassination case convicts would not be released till it pronounced its final order on the Centre’s plea challenging the TN government’s decision.

Notably the Supreme Court had ordered a blanket stay against State governments using their power of remission under sections 432, 433 of CrPC to release life convicts on July 9 last year.

The trigger for the stay order came when Centre challenged the Jayalalithaa government ordering the release of seven life convicts whose death penalty was commuted to life sentence by the Supreme Court.

The modification of the stay order by the Constitution Bench led by Chief Justice H.L. Dattu however came with certain riders.

Notably the SCI had on July 14 last year restrained the states from releasing lifers after remitting their sentences while staying Tamil Nadu government’s decision to release Rajiv assassination case convicts on the ground that they had served more than 22 years in prison.

This had closed the traditional window provided to the state governments to exercise remission powers to release life convicts after they served 14 years in jail.