The 10 November (2016) verdict of Supreme Court declaring the Punjab Act of 2004 as unconstitutional and reviving its earlier decree for expeditious completion of Sutlej-Yamuna Link (SYL) canal has ripped open the old wounds which had brewed a decade long trouble in Punjab in 1980s entailing a spree of blood spilling.

Not only the latest verdict affirms the centralization of power at the Centre, but it is also in tune with the rising tide of nationalism which leaves a little space for dissent even from a state legislative. Expressing his opinion along with the verdict, Justice Shiv Kirti Singh , one of the five-member bench asserted, “in most unambiguous terms… the Indian Constitution envisages a federal form of governance but with a pronounced bias and obvious tilt towards the Centre. Historically, the States were not having absolute sovereignty. The territories of States can be altered or totally taken away and even their names can be changed.”

Clearly, such an approach left no space for the Apex Court for evaluating the ground realities, recent historical events emanating from the SYL imbroglio and reviewing afresh Punjab’s four-decade-old plea that nationally and internationally accepted riparian principles should be applied for settling its river waters dispute with Haryana. Evidently, the Apex Court took up only the technical and legal issues related to the SYL canal.

Ironically, the verdict came at such a crucial time when as the Punjab assembly polls are only 2-3 months away and main political parties, already in electioneering mode , vying one another in projecting themselves as defender of Punjab natural resources– river waters as prominent one of them.

To outwit the ruling Akali-BJP alliance on the SYL issue, all 42 Congress legislators in the 117-member Punjab assembly have already tendered their resignation to the Speaker to register their protest against Apex Court verdict. Punjab Congress Chief Captain Amrinder Singh, leading the party’s electoral campaign, has also submitted his resignation from Amritsar Parliamentary constituency which he won defeating Finance Minister Arun Jaitley. 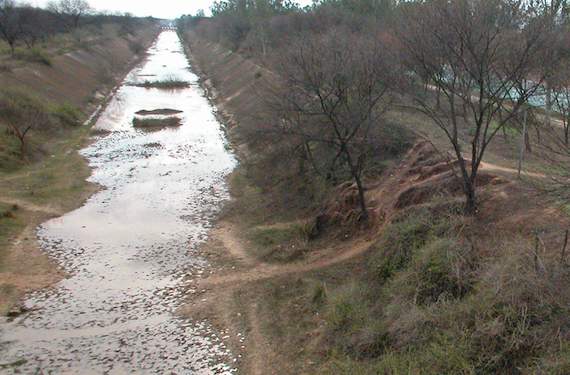 Chief Minister Parkash Singh Badal , too, has called a special session of the Punjab assembly on 16 November to take some drastic and populist steps to prevent the construction of SYL in Punjab territory . The AAM AADMI Party (AAP) has also joined the fray by sitting on an indefinite ‘dharna’ at village Kapoori ( in Patiala district of Punjab) where former Prime Minister Indira Gandhi had ceremonially dug the ground for the construction of 214 KM canal, 122 KM of which in Punjab and rest in Haryana.

Overriding political considerations of Indira Gandhi had embroiled the construction of the canal since its inauguration. The SYL canal was planned to take Haryana’s share of water from Ravi and Beas rivers through up-stream Punjab’s territory. As the Emergency was still in force in 1976 , Indira Gandhi allocated 3.5 MAF waters from Ravi-Beas river to new state of Haryana from undivided Punjab’s share. The Akalis opposed the Indira Gandhi’s move awarding river waters to non-riparian Haryana and Congress ruled Punjab government, too, challenged her decision in Supreme Court in 1981 on the same plea.

For keeping a tight political grip over Haryana which encircles Delhi from three sides, Indira Gandhi again swung into action in 1981 itself and managed a tripartite agreement among Punjab, Haryana and Rajasthan, retaining Haryana share at 3.5 MAF what she had allocated in 1976. To smother its people’s ruffled feelings, Punjab was allocated 4.22 MAF projecting a bigger share than that of Haryana. And Rajasthan was given away a share of 8.6 MAF and for that purpose, availability of river waters deliberately inflated at 17.17, much higher than the prior estimates of 15.85 in 1955.

Stark Political maneuvering of Indira Gandh came to the fore when she forced her party Chief Minister Darbara Singh to withdraw the Punjab government’s case filed in the Supreme Court challenging the allocating of river waters to Haryana and Rajasthan in violation of the riparian laws. Later, referring to arm-twisting tactics of Indira Gandhi, Darbara Singh expressed his sheer disgust to a media person that he was asked to sign the ‘tripartite agreement at gun-point’.

The 1981 tripartite agreement was the beginning of Punjab trouble as the Akalis with a strong base among the Sikh peasantry at that time, launched a morcha (agitation) against the digging of the SYL. Initially, the CPI-(M) was also apart of that agitation, known as ‘Kapoori morcha’ but, later, the left party, wearing nationalism on its sleeves, wriggled out from the morcha accusing the Akalis of following religio-political pursuits on the SYL issue.

Later on , the Akalis merged their Kapoori morcha with radical Sikhs’ morcha already going on from the Golden Temple Complex, Amritsar under the command of Sant Jarnail Singh Bhinderanwale for the release of the arrested Damdami Taksal activists. Putting a reframed chart of religious, cultural, political and economic demands to the Centre, the joint morcha, however, focused on the acceptance of the Anandpur Sahib Resolution which sought more powers to the states as a curtailment of over-centralization powers as witnessed during the Indira Gandhi regime.

Near two-year long that morcha witnessed around three lakh arrests of peaceful akali volunteers besides the upsurge of Sikh militancy which ultimately culminated in storming of the Golden Temple Complex by the Indian army and spilling the blood of thousands of innocents. The assassination of Indira Gandhi followed by massacre of thousands of Sikhs in Delhi and dozens of other cities are the parts unbroken chain of events which began with Indira Gandhi’s inauguration of SYL in Punjab on 8 April 1982.

Instead of taking any lesson from all those happenings, the ruling political elite at the Centre and the New Delhi Establishment rather took up those developments as a challenge to their authority and a potent threat to the very existence of Indian nation-state. That could be plausible reason which led Rajiv Gandhi to force Punjab Chief Minister Surjit Singh Barnala to take up construction of the SYL expeditiously in 1986. But by the time the SYL issue became an emotional issue for the Punjab peasantry, which prompted the Sikh militants to attack on the canal officials stalling the project half-way.

Supreme Court verdict of 2004: Over the years, the intensive agriculture in Punjab saw a sharp fall in ground water turning nearly 120 of the total 133 ‘water blocks’ in the state as ‘black’ meaning thereby non-availability of underground waters in the state’s majority areas . Of the total irrigated farming as much as 75 percent area is dependent on water supplies from around 1.2 million energized tube wells in the state. This led to a sharp fall of water underground water level rendering useless the usage of centrifugal pumps for drawing up the water. Hard-pressed farmers switched over to highly expensive submersible technology to pull underground waters for growing crops which, eventually, resulted in heavy farm indebtedness with farmers’ suicide in the row.

All that, however, made the requirement of river waters more pronounced for the Punjab peasantry. And adherence to the riparian principles for distribution of river waters became the watchword in the political lexicon of Punjab.

At this juncture, adjudicating on Haryana’s contention for supply of its share of 3.5 MAF waters from Ravi and Beas rivers, the Supreme Court directed Punjab twice – in 2002 and 2004 – to complete the building of the SYL canal in its territory.

Then, ruling Congress Chief Minister Capt Amrinder Singh called a special session of the Punjab assembly and enacted the Punjab Termination of Agreements Act on 12 July 2004 to stall the pressure from the Apex Court for constructing the SYL canal. The Act not only gave Amrinder Singh a leeway against the SC directions but also catapulted him to a powerful and darling leader of the peasantry, matching the Badals.

After lying dormant for a decade, that Punjab Act of 2004 again surfaced when Haryana was to go to polls in 2014, its assembly passed a resolution seeking the Centre’s intervention in the SYL issue. With the BJP coming to power in Haryana the state government sent that assembly resolution to the Rashtrapati (President) who , in return, referred the Punjab Act to the Supreme Court for adjudicating its constitutionality and validity.

The Apex court constituted a five-judge bench headed by Justice AR Dave for this purpose which gave its verdict on 10 November 2016 striking down the Punjab Act of 2004 and directing the Central Government for expeditious completion of the canal. The verdict said Punjab had ‘exceeded its legislative power in proceeding to nullify the decree of this (Apex ) court ‘. Referring to 1981 tripartite agreement signed at the behest of Indira Gandhi, the verdict said “ that could not have been unilaterally terminated by one of the parties…. by exercising its legislative power……. Such unilateral action has to be declared contrary to the constitution of India as well as provision of the Inter-State Water Disputes Act of 1956.”

Most strikingly Justice Shiv Kirti Singh’s recoded opinion goes to affirmation of New Delhi’s paramount authority when he says “Over subjects covered by the Concurrent List, in the case of any repugnancy, the laws by Parliament have superiority and prevail over those by State Legislature. Executive powers are understandably co-terminus with the legislative powers”. Such observation furnishes a solid ground for the Hindutva brand of nationalism which ignores the empirical wisdom and political sagacity for resolving the long-pending disputes.

Punjab , now, stands again at a slippery threshold with threats of turning it into a cesspool of politicking looming large. end

* About Author: Jaspal Singh Sidhu , a senior journalist retired from United New of India as Special Correspondent at New Delhi. As an Independent journalist he writes on political and cultural issues. He could be reached at email: jaspal (dot) shd (at) gmail (dot) com.