Notably, both MPs were suspended from the Aam Aadmi Party (AAP) for ‘anti-party activities’ yesterday after they held a parallel political conference at Baba Bakala. 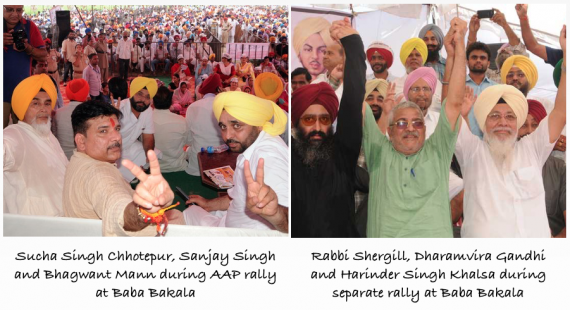 Fatehgarh Sahib MP Harinder Singh Khalsa that said the aspirations of people had to be kept in mind while framing policies. “Kejriwal can be compared to former Prime Minister Indira Gandhi as he runs the party without hearing the views of his party men. He has become too egocentric that he does not consider the suggestions of other party leaders,” said Khalsa.

Accusing Arvind Kejriwal for targeting the leaders holding different views, Dr. Dharamvira Gandhi said: “He (Arvind Kejriwal) deliberately targets those who choose to differ with his opinion. I belong to Punjab and the interests of its people are my top priority”.

“How can central leaders, including Sanjay Singh, decide what is right and wrong for us. By suspending us, they have challenged the dignity, intelligence and pride of not only the chosen MPs but also the volunteers,” he added.