Chandigarh: The Swaraj Lehar has condemned police action against Ludhiana MLA Simarjit Singh Bains and other protesters yesterday while they were protesting against the FastWay Network for removing Zee (Punjab, Haryana, Himachal) from cable network in Punjab.

“As per the information from some of the members of Team Insaaf the interview given to the TV channel Fastway had exposed the role of the family of Bikram Singh Majithia, Revenue Minister in the Akali-BJP government. Swaraj Lehar Punjab condemns this brutal act of the police and demands the immediate release of Simmerjit Singh Bains” reads a statement by Swaraj Lehar. 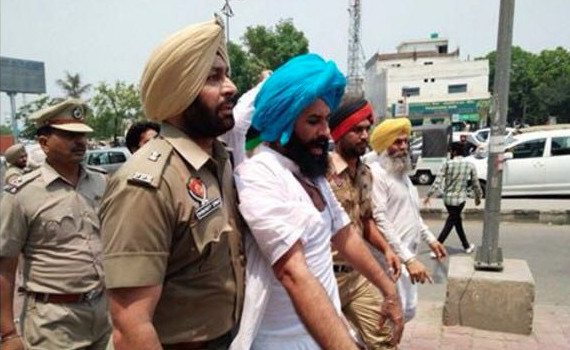 “What people in Punjab call it as ‘cable mafia’ has already blocked two channels, Day & Night, and ABP entering into Punjab and now withholding interview is violation of the fundamental right to information. It is worth reminding here that nearly two months back an interview with the Fastway was requested to Yogendra Yadav, Convenor, Jai Kisan Andolan and he agreed on the condition that no part would be edited. To his surprise many parts of the interview were simply deleted at the time of airing the interview. Out of protest Yadav simply refused to entertain a similar request later on made by the Fastway”, the statement reads further.