According to Punjab Tribune Sukhwinder Singh Soni, a follower of Damdami Taksal who resides at Mehta based headquarters of the Taksal said that they did not intended to kill anybody and maintained that their initial plan was to beat-up and threaten Dhadrianwale.

Soni reportedly maintained that Bhai Ranjit Singh Dhadrianwale’s men had started firing and the attackers had fired in reply. 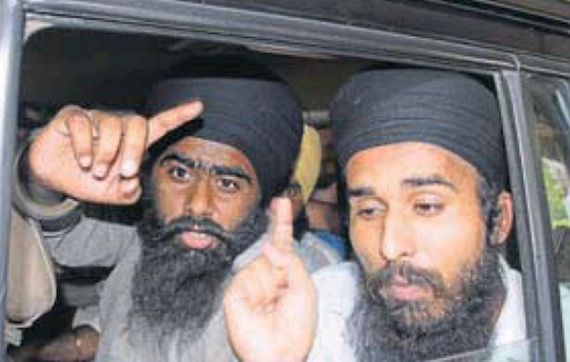 Arrested persons speaking to the media

Punjabi Tribune notes that the police have now started investigating the possibility of firing from both sides.

As per media reports, the arrested persons told police during investigation that the conspiracy to attack Dhadrianwale was hatched inside the Damdami Taksal (Mehta) but Taksal Chief Baba Harnam Singh Dhumma was not aware of it.

They reportedly said that the reason behind the attack was Bhai Ranjit Singh Dhadrianwale’s recent statements against Baba Harnam Singh Dhumma.

Notably, both Baba Harnam Singh Dhumma and Bhai Ranjit Singh had been issuing statements against each other. The audio/video clips available on YouTube and Facebook show that both the pracharaks were using low-language against each other.

Meanwhile, four persons- including Sukhwinder Singh Soni, who were arrested on May 20 were presented before a local magistrate in Ludhiana (on May 21) who sent them on police remand till May 26.

Around thirty supporters of the Damdami Taksal had gathered outside the court room and raised slogans against the Punjab police. They alleged that the police was unduly harassing Taksal supporters and activists.

According to Hindustan Times, the arrested accused Sukhwinder Singh Soni told the media that he was innocent and Dhadrianwale had got himself attacked for publicity and defaming the Taksal.

“If he speaks against the Taksal in future, he will pay for it,” HT quotes Sukhwinder Singh Soni.

Charanjit Singh, a close aide of Damdami Taksal head Harnam Singh Khalsa and a representative of the Taksal in Shiromani Gurdwara Parbandhak Committee (SGPC), accused police of targeting Dhumma supporters and framing them. “Dhadrianwale has been speaking against our chief for the past few months but the government and police have let it. We, however, will not sit silent,” he said, adding that if the police harassed or tortured the accused, they will face the ire of the Taksal supporters.

The police have so far arrested eight persons arrested in this case.

Meanwhile, Bhai Ranjit Singh Dhadrianwale has said that if the police fails to expose and arrest the “conspirator”, he would launch a massive agitation.