‘Terrorist, go back to your country,’ attacker yelled in assault of Sikh man

Washington: “Terrorist!” “Bin Laden!” “Go back to your country!” came the shouts from the other car.

Inderjit Singh Mukker, a father of two on his way to the grocery store in his Chicago suburb, pulled over when the vehicle in front kept tailgating him, according to the Sikh Coalition. The 53-year-old Sikh man, who wears a beard and turban, expected that the person in the other car would just drive past.

Instead, the Coalition says, the other driver got out and stormed toward him, reaching into Mukker’s car and repeatedly punching him in the face. Mukker lost consciousness and had to be taken to the hospital, where he received treatment for a fractured cheekbone, bruising and blood loss and six stitches for the lacerations on his face. 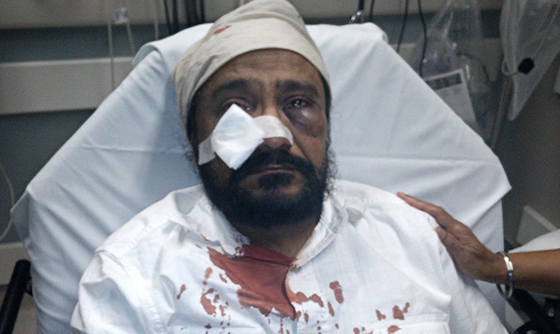 Police in Darien, Ill., 30 miles southwest of downtown Chicago, said that the incident Tuesday night is being investigated as a hate crime, according to NBC. The alleged assailant is in police custody.

Mukker, who was released from the hospital Wednesday, gave a statement to the Sikh Coalition, the nonprofit advocacy group providing his legal representation.

“No American should be afraid to practice their faith in our country,” he said. “I’m thankful for the swift response of authorities to apprehend the individual, but without this being fully investigated as a hate crime, we risk ignoring the horrific pattern of intolerance, abuse and violence that Sikhs and other minority communities in this country continue to face.”

According to Simran Jeet Singh, a senior religion fellow at the Coalition working on Mukker’s case, Sikh Americans have been increasingly victimized in hate crimes in the years since the Sept. 11, 2001, attacks on the United States.

“For Sikh Americans, the unique markers of religious identity — the turban, the beard — these markers are associated with the markers of terrorism,” he said.

In other words, “People see a Sikh and construe them as the enemy.”

On Sept. 15, 2001, four days after 9/11, Balbir Singh Sodhi was shot and killed outside his gas station in Arizona. The gunman mistook the 49-year-old Sikh, an immigrant from India, for an Arab, and said he killed him in retaliation for the attacks. The attacker was found guilty of murder and sentenced to death.

In the following month, the Sikh Coalition recorded at least  300 cases of violence and discrimination against Sikhs in the U.S. The next 14 years have seen hundreds more. In 2009, the Coalition found that 9 percent of Sikh adults in New York have been physically assaulted for their religion — usually by people, who in addition to their violent vigilantism,  apparently remain unaware of the distinction between Sikhism and Islam. “Osama bin Laden” and “terrorist” are common slurs.

This summer, the Sikh temple in Wisconsin where six people were fatally shot by a white supremacist in 2012 decided to lock its doors. The community was shaken by the deadly shooting at a historic black church in Charleston in June, and felt it was no longer safe to stay open to anyone. Now, those who arrive for daily services have to ring a buzzer to be allowed inside.

“It used to be in the Sikh religion, all doors stayed open,” Balhair S. Dulai, vice president of the temple, told the Washington Post. “But what happened here, and what happened in South Carolina — these things could happen anywhere. No one is immune.”