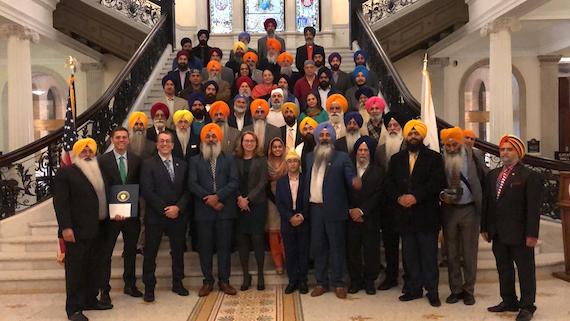 The event began with Ardas, a Sikh prayer recited by Giani Balwinder Singh followed by speeches from the community leaders. This Bill was first introduced by the president of the New Jersey Senate, Stephen M. Sweeney and passed by New Jersey’s both Senate and the State General Assembly. 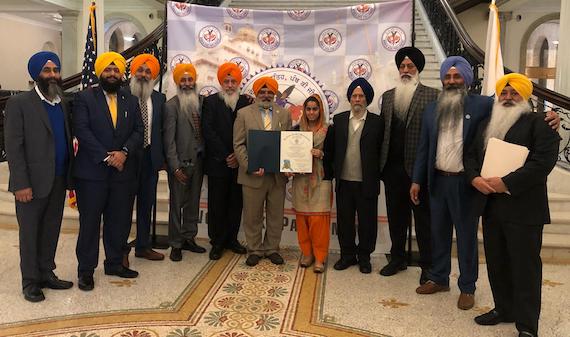 One of the clause in the “World Equality Day” Bill reads, “…..the Sikh tradition, a movement that strives to conquer communal hatred and division by following the sacred teachings of Guru Nanak Saheb and his tenets of honest work, chastity, and reverence to God;…”. The Sikh religion is rooted in the belief that every person is equal, regardless of race, gender, sex, or creed.

Co-ordinator of the World Sikh Parliament, Himmat Singh said “The Senate walls read – truth, justice, liberty, and humanity echoing the teachings of Guru Nanak Saheb. He also said Higher than Truth is Truthful Living. These are important aspirations to the Sikh Nation that serve as the guiding principle in these times, and the whole world can benefit from them. The World Sikh Parliament will work with the world governments and the United Nations to create a world that Sri Guru Nanak Saheb envisioned.”.

Dr. Amarjit Singh said that this was a great day for the Sikh Nation. He congratulated the members of the Assembly, the speaker of the house, members of the World Sikh Parliament (USA and Canada) and the Sikh community in attendance from Boston, New York, New Jersey, Virginia, Maryland and Washington DC on the introduction of the bill.

“1699 was the year when the first female voted in the Netherlands, whereas Sikhism already provided women with equal rights, a long time ago in the 15th century. In England, it was a Sikh woman named Sophia Duleep Singh who was a prominent leader in the suffrage movement. Today we celebrate, the birthday of the great revolutionary, the great Nanak who gave equality to all”, said Harman Kaur, member of the World Sikh Parliament representing the Civil and Human Rights Council and is also the General Secretary of the US region. 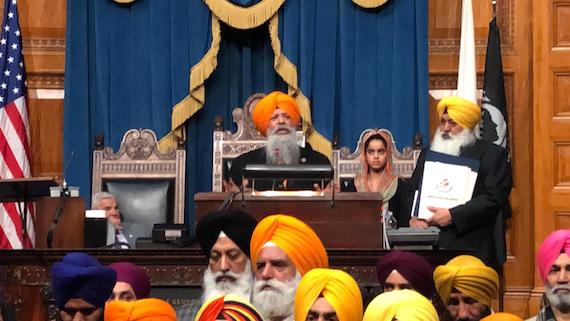 Sikh community, began immigrating to the US more than a 100 years ago, and since then Sikhs have played a vital role in the growth and vitality of the nation and in its prosperity and success. Sikhism has nearly 30 million adherents throughout the world and roughly one million Sikhs live in the United States.