Washington, D.C.: The Sikh Coalition is excited to announce our new Law & Policy Director, Arjun Singh. Arjun will replace Rajdeep Singh, who will depart to pursue a second graduate degree at the end of August. 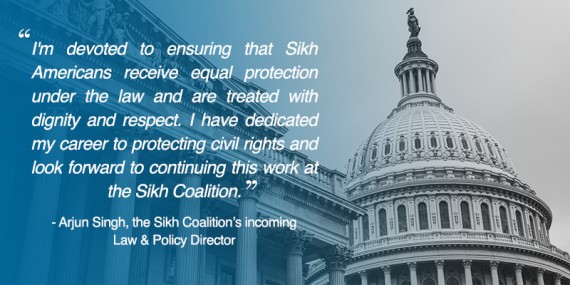 Arjun joins the Sikh Coalition team with nearly a decade of litigation and advocacy experience in Washington, D.C. A graduate of New York University School of Law, he spent six years working as a Government Affairs and Litigation Associate at the international law firm of Covington & Burling LLP. While at Covington, Arjun provided significant pro bono legal work for the Sikh Coalition on TSA profiling issues. Most recently, Arjun worked as a National Legislative Counsel at the American Civil Liberties Union (ACLU).

“While it’s hard to replace Rajdeep, there is no better person to fill those shoes and carry forward our policy and advocacy work than Arjun,” said Executive Director, Sapreet Kaur. “He has the rare combination of lobbying, litigation, advocacy and media experience necessary to build off the substantial momentum we have gained in this area over the past several years.”

Arjun’s prior work has focused on civil and human rights, core program areas of the Sikh Coalition. He is a frequent contributor to national media outlets like Al Jazeera America, CNN, the Washington Post, and USA Today.

After nearly six years with the Sikh Coalition, Rajdeep’s imprints on Sikh civil rights issues leave a legacy that will never be forgotten. His efforts built key bridges on Capitol Hill, inside government agencies and across the civil rights sector. Early in his tenure, he led a multi-organizational effort to successfully repeal an Oregon law that prohibited religious minorities from wearing their articles of faith as public school teachers. His leadership was crucial in passing the California Workplace Religious Freedom Act (AB1964) in 2012. Most recently, he spearheaded the successful campaign to expand federal hate crime tracking that came to full fruition in 2015.

“Rajdeep’s list of accomplishments could fill many chapters of the Sikh Coalition’s book,” said Sapreet Kaur. “His ingenuity, indefatigable work ethic and sophisticated approach to addressing our complicated issues has left an impression on Congress, the White House, and the American public. Rajdeep has built credibility for the Sikh community in D.C. and played an enormous role in changing the dialogue on Sikh issues. The results speak for themselves.”

Over the next six weeks, Rajdeep Singh will work with Arjun to ensure that our policy work is successfully streamlined from one colleague to the next. We thank Rajdeep for his service to the organization and the community, and welcome Arjun to the team!