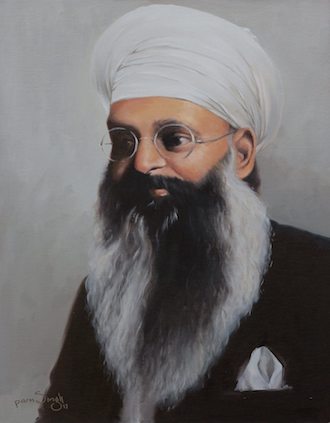 It may not be inappropriate here to refer to a school of Nām—culture in the Punjab that must be so called to distinguish it from the Sufis (the Sufis being the Hindu-Muslim School of thought), the Sikh-Muslim School. It is well-known that Baba Guru Nanak was well-beloved of both Hindus and Muslims. In distant Beghdad, he counted disciples like Shah Behlol. At Mecca, he met Quazi Rukan Din, the Pir of Uch and the latter bowed down to the Guru, begging of Him his sandals to be kept as relics in his dynasty and those sandals are still there. Farid Sani and others like Pir Makhdum Bahauddin were great devotees of Guru Nanak. Mardana was his disciple, Kamal of Kurham loved and died singing the Guru’s mantram “Glory be to the Guru”! “Glory be to the Guru”!

And so this intercourse between him and the Muslim mystics became more and more intimate as the Guru’s culture spread. The Hindus recited Japuji, sang the Guru’s name, lived dedicated lives and went great distances to meet him. They gave up caste, and partook of the food at the Guru’s langar. Their doubts and superstitions were dispelled. And they came later on, in Sikh history, to be known as Sahajdharis. These Hindus had abjured wholly the superstitious sundry faith of Brahminism and had taken shelter in the Guru. They formed the Sikh-Hindu School. The fact that this Sikh-Hindu School has automatically lapsed into Brahminism, however regrettable, shows that any school of new culture in India beset with so many quagmires of sects founded on smaller philosophies and empty dogmas, needs not only spiritual isolation, but physical isolation to live. Few Sahajdharis have survived, while the Sikh with beards and hair forming a kind of physical isolation still respond to the call of the Guru, as despite all their imperfections and poverty they still harbour the Guru’s spark.

In the time of Guru Arjan Dev, both Hindus and Muslims gathered round his person. Meeting him was a culture for all. The following extract from the pen of the Emperor Jahangir form His Memories shows how both Hindus and Muslims gathered round Guru Arjan Dev, which the Emperor was of course unable to understand and appreciate as the great Akbar had done.

“So many of the simple-minded Hindus, many many foolish Muslims, too had been fascinated by his ways and teachings. They called him Guru, and from all directions crowds of people would come to him”.

The fact that Guru Har Gobind had to shelter a Muslim woman disciple from Lahore at Amritsar, to whom the Sikh name Kaulan was given, shows that there was already a reaction caused in some sections of Mussalmans. They might have been quite few due to political reasons, but the element of intense devotion to the Guru was there among them. Ordinary surface-history does not record the meeting of the mystic ancestors of Bullah Shah and Waris Shah, but the literature of these periods of the Punjab is full of internal literary evidence of the language of the Guru being used by these Muslim saints of the Sikh-Muslim School.

A most notable but invisible change had occurred. The Moslem poets of the Punjab gave up their Persian and Urdu in favour of the Punjabi language used by the Guru. Shah Hussain, Bullah Shah and Waris Shah, all belong to this renaissance which followed the influence of Guru Arjan Dev on the mind of his age and the age following immediately after him.
These Punjabi mystics belong to the Sikh-Muslim School, in which though nominally Muslims, they preached the Guru’s religion of love, and the Guru as God enough for the living beings of this earth.

The Sikh has certainly no quarrel with names. It is the process of inspiration which must come to play under any names.

The dedicated and pure life of Sikh men and women must have had its effect all round it; so much so that it must be said that the Punjab of the Gurus, whether Hindu or Sikh or Muslim, is essentially Sikh. The new interpretation of Islam given by Iqbal as love is due to the un- conscious influence of the Guru’s presence in the Punjab. It is my faith, no Punjabi can escape the spiritual hidden effects of this great inspiration.

So also in the Sindh Province. In the Punjab of the Gurus came caravans of disciples from Sindh, Kabul and Kandahar, from Baghdad and the Caucasus Ranges and mingled as multi-coloured humanity in the joy of the holy crowds, in the joy of seeing Him.

This pageant of a whole people made alive by the great magnetic influence of the Guru’s love and inspiration was life-giving.

Recently in our days, there was a Muslim fakir in the district of Gujrat1 in Punjab who would, while going away or returning to his place, alight at Amritsar and pay his visit to the Golden Temple. He used to say, “What must have been the influence of the great Gurus, when after four hundred years, here by touching this marble floor of their temple, one gets the stream of Simrin, ‘Naming Him’, so much quickened. The broken ones are united here. No impurity can stay here. A magnetic current of inspiration still flows here. Those who know aught of spiritual life and of Simrin can feel the flow of inspiration”. Such is the testimony of this mystic, evidently not openly of the Sikh School.

Though history does not trace the social tradition of a decade ago of which I myself have been the child and eyewitness, there has been great amity almost amounting to kinship as of blood between the Sikhs and the Muslims in the villages. The other day I went to a village and lived as the guest of a Muslim family of farmers. Their simple rustic feeling and service reminded me of the Sikh, and I melted away into the feeling, “These are the Sikhs of my Guru, the untutored children of God!”. Seeing them I almost cried, “How good to be Muslims if such sweet love and service is Islam!”

Sikh life cast a halo of spiritual softness, almost that of the Buddha’s sculptured face on the Land of the Five Rivers and mellowed down the tone of the very speech of the Muslim. These were the social effects of the Sikh-Muslim School.

Rai Bular, the Bhatti child of Talwandi (now Nanakana) has left behind in the very blood of his offspring a feeling of worship for Guru Nanak.

These followers of Guru Nanak loved the Gurus, served the people, and thought ill of no one. Their universal goodwill, their angelic demeanour, their saintly lives drew an involuntary and silent homage from the people of the Punjab. Even the old Pathans of the Indian Frontier bear witness and say, “The Sikh is a Fakir, his prayers reach God. Bow to him as a man of God whenever you see him”.

The Guru loved the people, made no distinction between the Hindu and the Muslim. It was the spirit of the Guru’s love unshackled by sects and creeds that went deep into the soul of the people.

Invisible transformations were many, but great impetus to a universal friendship between man and man was given by the Guru. He awakened the people to a new spiritual and social consciousness. He awakened individuals to cosmic consciousness. All religions met in the Guru, losing their names. The past was fulfilled and all the future hovered round the song of the Guru.  The “Guru” was thenceforward a whole religion of love, for the people. It was a new liberty.

A reference to the pure Punjabi literature created by Bullah Shah and Waris Shah would show in the atomic structure of its words, that this is the language of Guru Granth, with an individual note of rapture from each such poet. Particularly the whole tone of Bullah Shah is distinctly of the colour of the Guru. He refers to the transient pleasures of the world as “plucking of Kasumbha flowers”. The Guru also calls them the false dye of Kusumbha as compared with the fast dye of the maddar-root to which the joys of soul are compared.

“The men of deeds, of practice of His presence have crossed the river.
I am left behind, defeated in myself. I have been picking Kusumbha buds from these fields of life”.
He refers to Simrin as “spinning of cotton yarn”
He refers to man as the Bride who is to make preparations here by making sufficient yarn and cloth for her “dowry” and refers to the home after death as the Home of Her Bridegroom. This is exactly in the spirit of the in the very same phrase.

“Sat Guru has made the unmanifested manifest me.” (Sat-Guru nealakh lakhaya hai)—is a whole refrain of Bullah’s one poem which reads like a tune taken from Guru Granth. Bullah Shah sings directly out of his soul, but he is truly inspired by the Guru-atmosphere in the Punjab.

Shah Hussain, whose songs are so poignant with aching love for God, is strongly resonant of the Guru culture. All great things refuse to be classed. They go everywhere and get classed with everything. But to swing the pendulum is to impart new life to it. Sikhism has been all along supposed to be a blend of Semitic and Aryan cultures. From my study of Guru Granth, the most authentic record of the Guru’s mind, I can say that it is the historic culmination of Buddhas religion, the religion of the truly illumined, the truly illumined of all races and countries. Few would deny that the true spiritual and human culture first starts from Buddha in this world, it is Buddha’s gospel that in the life of Christ becomes true Christianity.2 By Christianity I mean the Religion of Christ Himself. “Those who have seen the Son, have seen the Father.” And the Christ’s inspiration gives Islam its humanity. Semitic and Aryan cultures seem to have in animal sacrificing cruelty a common ancestry. Islam in this latter aspect is Vedicism, a dualism and goes to conquer the Kafir like the Aryan of the old conquering the non-Aryan.

Islam by its attitude of conquering others and hating the Kafir and the animal sacrifices in the name of Allah, presents difficulties to the modern thinker. Islam lives in its first great Caliphs. Islam lives now only as an aggression akin to that of an Empire-maker. Guru Nanak sympathised with the Muslims in their fall from true Islam into the mad religion of empire-making and crushing their fellow-beings under their heels, and there are many passages in which he as their teacher admonished them back to the right conduct, right feeling and right contemplation. The wise and truly religious therefore, bowed down to the Guru.

The religion of the Gurus thus is the Great Humanity of feeling which makes man good without an effort, and is but a “looking up,” “a gazing up” towards God. Men and women looking up to Him forever, waiting for His coming, opening their mouths like rain-birds to the shower of His Love. A moment comes when by His favour, man is transmuted into a god. And all effort of creation is to produce that great man of God. If any animal is to be sacrificed in love of Him, it is the animal-in-man.

The synthetic blending of things takes place in the realms of the intellect; the Guru lives in the soul of the Universe, in the spirit of life, in the labour of love, in the inebriation of that
Great Beautiful. A new present starts with the Guru. The future is all his.

1. This district is now in Pakistan. – Editor.
2. These are individual opinions. – Editor.