The Sikh Struggle for Self Determination

Following the resolutions of the Sarbat Khalsa of 26 January 1986, the Sikh nation on 29th April 1986 declared the goal of peaceably establishing an independent, sovereign state in Indian-occupied Punjab where the Sikhs would live in security, freedom and dignity. On Khalistan Day 2019, the Sikhs will reaffirm their commitment to that noble, lawful and historic national decision. 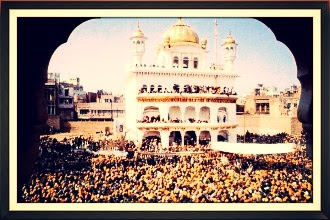 That crucial development reflected the aspirations of a sovereign nation, complied with international law and met the needs of the nation at a crisis point triggered by an illegal, undeclared war launched by the Indian state. The nation today hails the heroes who stood up to that Indian aggression and remains, despite the unrelenting cowardly oppression that continues to this day, committed to achieve the sovereign freedom which our scriptures and history declare is our right and our destiny:

India’s genocidal assault on the Sikhs from June 1984 through to 1995 cost an estimated 200,000 Sikh lives. From the notorious army assault that was Operation Bluestar in Punjab in June 1984, the carnage on the streets of India of November 1984 and the brutal extra-judicial killings and secret cremations throughout the period, India made it clear that it was prepared to go to any means to deny Sikhs a dignified, safe respectable existence in an increasingly right wing Hindutva orientated set up. Sikhs who stood up to the oppression remain in jail to this day, even where their sentences have been served. Let us not forget that those who resisted state terrorism and genocide were entitled to do so under international law. The right to self-defence is also a bedrock of the Sikh concept of Miri-Piri (temporal and spiritual power); we salute their contribution to the cause and their inspiring sacrifices.

Not only has India rejected any notion of the Sikhs being a separate nation, it has – equally outrageously – sought to deny (in Article 25 B of the Indian Constitution) that Sikhism is a distinct religion. It has breached international riparian law by shamelessly stealing Punjab’s precious water resources, so much so that international experts predict that the land once envied for its rivers is destined to become a desert.

India’s recent warmongering in South Asia risks a nuclear holocaust which most military experts agree will wipe out millions of lives, with Punjab being the theatre of such a war. The Sikhs as a nation are not a party to the Indo-Pak dispute, yet it seems set to be the biggest victim of any such Hindutva inspired war. As a key stakeholder in peace in the region, the Sikh nation should be central to any decisions that threaten our homeland and population, but the Indian political establishment seems happy to play its war games at our expense. Just last week, PM Modi warned Pakistan that his nuclear weapons are for warfare, not for displays at Diwali. The Sikh case against this alarming current war threat will be put at a major conference being held in Birmingham’s Council House on 11 May 2019.

The wanton, repeated desecration of the Sri Guru Granth Sahib since 2015 goes unpunished, as do the politicians and police officers who killed innocent protestors calling for action against the sacrilege. Our Gurdwaras in India are under routine attack from those who seem determined to ‘Hinduise’ the faith, just as there is a concerted attempt to eradicate Sikh practices by promoting fake cults that openly challenge Sikhism in its very homeland. Punjab has been turned in to a drug den, with corrupt political patrons cashing in on the immoral trade that is being promoted to demoralise the youth of Punjab.

These are all existential threats to our nation and our faith. None of the so-called mainstream political parties in Punjab have shown any intent to address these injustices, making a mockery of the notion that India is a functioning democracy. The current 2019 Lok Sabha elections are an insignificant distraction for our people, they offer no meaningful means of resolving the Indo-Sikh conflict.

We should not and cannot accept this as the fate of a people that has been enjoined by our Gurus to work for a just world order.

The Sikh aspiration to rule, as embodied in our daily call for ‘Raj Karega Khalsa’, is based on a progressive and universal world view. The subsequent development of human rights, as part of the international legal system, endorses the concepts and leadership given to us by our Gurus. It is time to take positive steps to confidently assert the values we stand for and take our rightful place in the community of nations. The statehood secured by the nation under the leadership of Banda Singh Bahadur, the Sikh Misls and Maharaja Ranjit Singh has shown that the Sikhs have the capacity to rule and provide equitable governance that respects the fundamental rights of all of the citizens of Punjab.

The Sikh diaspora in particular is uniquely placed to take forward the struggle for Khalistan in the international arena. The right of self-determination, as enshrined in Article 1 of the 1966 International Covenant on Civil and Political Rights, gives the Sikh nation all the moral and legal justification to pursue that goal:
All peoples have the right of self-determination. By virtue of that right they freely determine their political status and freely pursue their economic, social and cultural development

India formally rejects the application of this Article to the nations and peoples trapped within its borders and the UN itself has told India that position is unacceptable.

In this Vaisakhi period, when we celebrate the birth of the Khalsa order, we must renew our efforts to secure the only plausible solution to the liquidation of the Sikh national interest in India. The futility of working within the framework of a country that is a serial Sikh genocide perpetrator is clear to all those who truly recognise the aspirations and rights of the Sikhs. Khalistan Zindabad!