New Delhi: Social Democratic Party of India (SDPI) held a protest demonstration at Jantar Mantar in Delhi on July 23 terming the incident of thrashing of Dalits by the cow vigilantes for skinning a dead cow in Una of Gujarat. The aftermath of this inhumanly act wherein the Dalits were stripped, flogged, bound and paraded on accusations that they had killed a cow for skinning has triggered protests all over India.

While addressing the gathering in the dharna held in the national capital, party General Secretary Elyas Muhammad Thumbe said, it is the Modi-led forces of aggressive Brahminism who should introspect with regards to the ongoing violent agitations by Dalits in Gujarat and other parts of India as it is not the question where it went wrong, but where did it go right. The discriminatory ideological oppression over Dalits which is being witnessed on Indian soil for ages must end so as to guarantee peace in the nation. 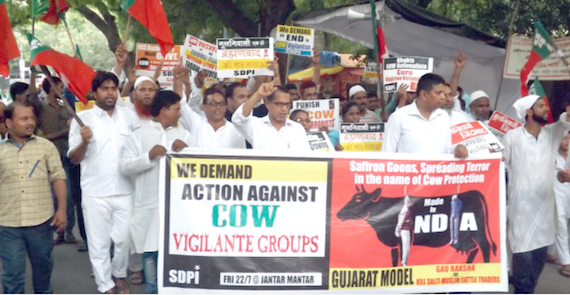 Elyas said it is time to draw the line and stand up against this divisive government at the Centre and States. The truth cannot be forgotten that Dalit, tribal and Muslim communities are exposed to grave security risk always and everywhere. Government, instead of appealing for peace to the victims of attack should chain and punish the cow vigilantes for the barbarism they commit. Cow protection cannot be a cover for the pursuit of the kind of aggressive vigilantism that is seen in different parts of the country.

In his address SDPI Delhi Pradesh President Adv. Aslam said it is now becoming RSS & BJP vs. Dalit, SC/ST, Patidars, Backward Classes, Minorities and Moderates. Gujarat is a failure in the sense that it has failed in its duty to take care of the minorities, Dalits, Adivasis and the people below the poverty line.