Punjab activists to visit JNU to express solidarity with students

Chandigarh: Various political as well as human rights bodies today gathered to debate and formulate strategy to checkmate what they called, fascist agenda of Modi Sarkar. Condemning the police repression and crackdown, the meet decided to send a team comprising lawyers, students and ex-serviceman to JNU to express solidarity with students & faculty members who have been deliberately and maliciously targeted by Indian state. The team will go once road and rail traffic is back to normal in Haryana.

Key note and resolution adopted during the meet at Kisan Bhavan, Chandigarh.

A new metamorphosis of change is sweeping the polity in the country. Holding a dissenting opinion or even a different opinion is nothing but a crime. Either you are with me or against me is the new political philosophy. The situation is a challenge to all right thinking people irrespective of what philosophy and ideology they represent. 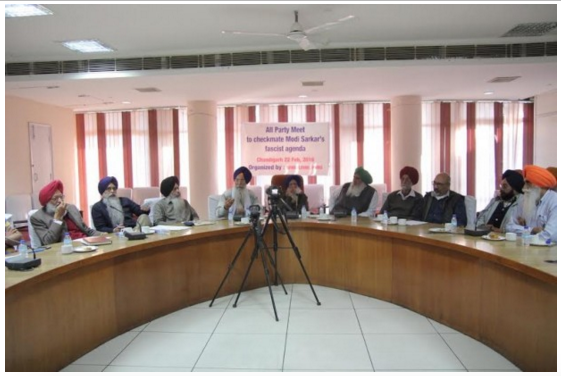 Today’s meet of socio-political activists, human rights defenders, intellectuals, writers and members of Kisan Union is an attempt to take head-on the forces of imperialism arising out of the latest episode of slapping of sedition charges against scores of students of Jawaharlal Nehru University (JNU) for organizing a social event to protest the hanging of Afzal Guru, the illegal detention of JNU students union president Kanhaiya Kumar and ex-Delhi University lecturer Prof SAR Geelani under sedition charges and organised and pre meditated hooliganism by a Delhi BJP MLA and lawyers at Patiala House courts and continued, witch-hunting and harassment of JNU & Kashmiri students and the mute response as spectators by the Delhi police. Punjab is no exception. The Punjab government has foisted the false cases under sedition laws against political dissenters in the last few years. Slapping of sedition charges against organizers of peaceful Sikh congregation at Chabbha on Nov 10 is a glaring example of abuse of laws and state machinery.

This gathering voices its concern and anger against the flagrant misuse of sedition charges by Punjab police on the orders of Akali-BJP government and Delhi police on the orders of Union Home Ministry-under whom it operates. Sedition as a crime has no place in a modern democracy, there is no justification whatsoever for provisions that silence dissent. These provisions are undemocratic and unconstitutional.

The right to hold independent belief and thought is under attack from present dispensation of the country. The BJP after grasping brute majority is all out to implement its lingering agenda of transforming India into Hindu rashtra. And for that, it had coined the new definition of nationalism and anti-nationalism. Those who fit in its scheme of things are considered ‘nationals’, rest falls in the category of anti-nationals. It’s not out of place to mention that famous writers, intellectuals and activists in their rejection of Hindutva brand of nationalism, have proclaimed that “they too were anti-national”.

Expressing our solidarity with JNU students and supporting them at their hour of need, this meet strongly condemns the Modi Sarkar for unleashing cultural terrorism against those who disapproves Hindutva brand of patriotism. We highly deplore the government, its machinery and irresponsible media for tarnishing the image of JNU and painting its students and faculty members with negative brush. The role of Vice- Chancellor of JNU and ABVP (student’s wing of the BJP) remained worst, while former acquiescing with the Union government allowed police crackdown inside the campus, the latter under establishment shield ignited the situation to pave the way for state repression.

This gathering firmly resolves to stand with victims of state terrorism, resists the cultural terrorism unleashed by RSS and its offshoots and rejects Hindutva’s brand of nationalism. This gathering warns the Modi government to revoke the sedition charges against JNU students, Prof Geelani, stop witch-hunting of JNU students and repealing of the colonial era law.