Lisbon, Portugal: A criminal complaint has been lodged with Portuguese Attorney General against the Indian police officers on the charges of torture and murder who are in Lisbon to seek extradition of Khalistan activist Paramjeet Singh Pamma, reads a written press release by the Sikhs For Justice.

The complaint against DIG Balkar Singh Sidhu, SP Ashish Kapoor and DSP Rajinder Singh Sohal has been lodged under the laws Number 31/2004 and 59/2007 that provides Universal jurisdiction over rights violation crimes if the offender is present in Portugal even if the crimes are committed in another country.

Demanding the preventive detention of Indian police officers, the January 28 complaint states “the crimes of which the accused are charged of are sentenced here for 12 to 25 years in Prison and the accused are now in Portugal which makes it urgent to provide an arrest demand before they leave the country”.

“Under sections 262, 277 and 283 of the Criminal Procedure Code, Portuguese public prosecutor is legally obligated to investigate all crimes brought to his attention and to prosecute when there is sufficient evidence that the perpetrator is present in Portugal and can be identified”, stated attorney Gurpatwant Singh Pannun, legal advisor to SFJ who is camping in Lisbon to defend Pamma.

“Paramjeet Singh’s legal team is keen to ensure that every avenue is pursued for his release and return home.  The filing of this criminal complaint is an important step not only in Paramjeet Singh’s case but also in the pursuit of justice by countless victims of torture and extra-judicial killings at the hands of Indian security services over many years.” Stated Solicitor, Amarjit Singh Bhachu who is leading the campaign in Pamma’s defense in UK. 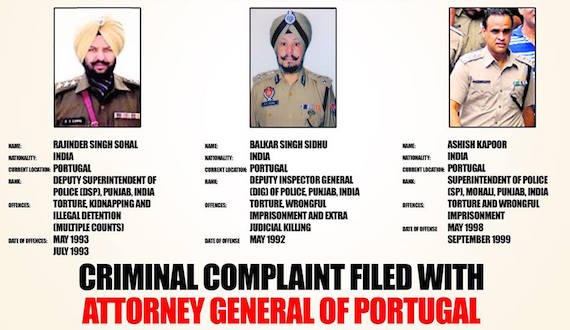 The evidence submitted in support of complaint consists of CBI charge sheet against DIG Sidhu, 2013 trial court judgement against DSP Sohal and an affidavit of torture victim against SP Kapoor.

Portuguese criminal lawyer Manueal Luis Ferreira in co-ordination with human rights group “Sikhs For Justice” (SFJ) has filed the charges on behalf of the torture victim Paramjeet Singh who is being detained in Beja Prison on the charges of 2009 murder of Rulda and 2010 bombings.